Review: Embassy of the Dead by Will Mabbitt 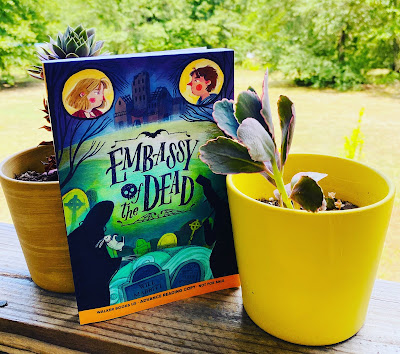 Some say that children (and cats) can see things no one else can. Some children are referred to as sensitive because they can sense when something is off...or they can tell when something paranormal is near. ⁣
⁣
Jake Green is sensitive, and when he coincidentally meets (and talks to!) his first ghost (spectre to be exact), Stiffkey, he mistakenly takes a package meant for someone else. Now that he’s opened the package, the Embassy of the Dead is looking for him, and they won’t stop until the grim reaper Mawkins finds Jake and plunges him into the Eternal Void. ⁣
⁣
Releasing in September, (author) Will Mabbitt) and (illustrator) Taryn Knight take young readers on a ghost-filled adventure as Jake and Stiffkey (with the help of a spirited young ghost named Cora) set to make things right. ⁣
⁣
I love ghost stories, especially ones where the writer, and in this case writer and illustrator) can create an entire world set with the living and the dead.⁣
⁣
Mabbitt creates a paranormal universe that reminds me of Beetlejuice with quirky ghosts and a journey to the spirit world. Knight’s illustrations bring the characters (both dead and undead) to life throughout the book. Together, they show young readers a world outside of reality (for James, dealing with his parents’ separation). ⁣
⁣
Their first book in a new series, I can’t wait to read more of Jake’s paranormal adventures
at July 28, 2020