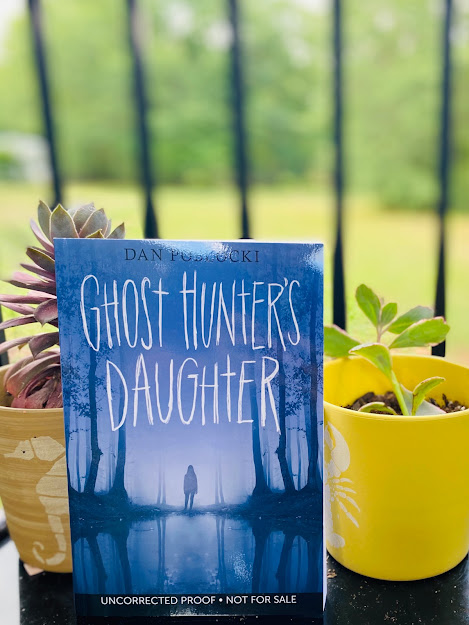 "They say if you see him, it's already too late."

I remember being obsessed with Ghost Hunters back when the show started in 2004 as I love all things paranormal. So when I saw the synopsis of Poblacki’s new book following the daughter of a famous tv ghost hunter, I was hooked.

Claire lost her mother suddenly and has been trying to find out if she is still with her, spiritually, but when the book opens, Claire has not received any messages from her so maybe Claire isn’t as sensitive as she would like, considering her father’s profession. She regularly meets up with her friends Norma, Francine, Mikey, and Whit after school to tell ghost stories and try to find their own evidence that ghosts exist.

Before they can start their next ghost hunt, Claire notices that she is being followed by a kid named Lucas whose Aunt LIzzie is known for being able to communicate with the dead, supposedly. Claire isn’t sure she believes it until Lucas tells her that her father is in trouble (he’s away on a ghost hunting adventure) and that the message to save her dad is coming from her mom. At first, Claire doesn't believe Lucas, but then she tries to contact her dad, and he doesn’t answer. He’s missing.

Claire enlists Lucas for his help, and they run away to take the bus to find her dead, with Claire’s mother following along through Lucas who has inherited his family’s “gift”. But Claire’s mom can only go so far as the outskirts of Hush Falls where Claire’s dad could be is filled with spirits, both good and evil, following a historic flood. Together, Claire and Lucas have to find and save Claire’s father before it’s too late.

Set for publication on July 7, 2020, Poblocki takes readers on a wild ghost ride with many twists and turns. Perfect for those young ghost hunters who love to read about action and adventure within the horror genre. Scary but not gory--enough to make you leave the night light one for at least one night!

Email ThisBlogThis!Share to TwitterShare to FacebookShare to Pinterest
Labels: Scholastic