Review: The Summer We Found the Baby by Amy Hest 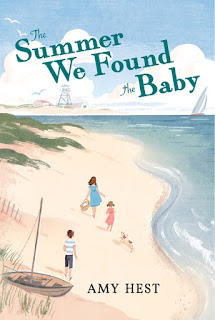 Eleven-year-old Julie Sweet never expected to find a baby on the children's library steps, and she certainly never expected to take the baby home with her and her six-year old sister Martha. But before she can think about what she's doing, she's running towards Belle Beach with a baby in a basket! Martha, who first thinks the baby is a doll, is mad at Julie for not letting her carry the baby, as if that is the biggest problem right now. Twelve-year-old Bruno Ben-Eli is on his way to NYC for his first trip on a train into the city after a secretive letter from his brother who is away in the military. Before he can get to the train, he sees Julie and Martha taking a baby off of the stops and running away. Does he follow the instructions in his brother's letter, or does he follow the girls with the mysterious baby to the beach?

Told in alternating narratives between Julie, Martha, and Bruno, Amy Hest presents a unique situation for these children that proves to be more than meets the eye. Julie, Martha, and Bruno have to face adult-like situations where they have to make tough decisions that only they can process in the moment. Not only do they face a tough situation with this mysterious baby, but Ben learns something new about his brother that changes his entire family.

With a faced-paced triple narrative Hest creates a tenderhearted, yet suspenseful, book for young readers that features a famous historical cameo in the end.


Amy Hest is the author of many beloved books for young readers, including Remembering Mrs. Rossi, Letters to Leo, and the Katie Roberts novels. She is also the author of many picture books, including Kiss Good Night, When Jessie Came Across the Sea, and On the Night of the Shooting Star. Amy lives in New York City.

About JOURNEY TO JO’BURG:
On the morning of the dedication of the new children’s library in Belle Beach, Long Island, eleven-year-old Julie Sweet and her six-year-old sister, Martha, find a baby in a basket on the library steps. At the same time, twelve-year-old Bruno Ben-Eli is on his way to catch the 9:15 train into New York City. He is on an important errand for his brother, Ben, who is serving in World War II. But when Bruno spies Julie, who hasn’t spoken to him for sixteen days, heading away from the library carrying a baby in a basket, he has to follow her. Holy everything, he thinks. Julie Sweet is a kidnapper. Of course, the truth about the baby they’ve found is much more complicated than the children know in this heartwarming and beautifully textured family story by award-winning author Amy Hest.