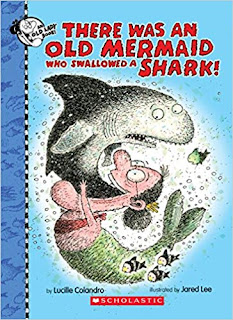 Here the old mermaid swallows a great white shark for no reason apparently, but by swallowing the shark, young readers find out some cool facts about the shark, like how much a shark can weigh and the rows and rows of teeth that sharks have in their mouths. Along with the shark, the old mermaid swallows a squid, a tropical fish, an eel, a crab, a sea star, and a clam! That way, the shark she swallowed won't be lonely. Even though the old mermaid is just playing pretend like little kids do, she learns a lot about these underwater creatures and how they're our friends. At the end of the book are some awesome extra features of facts about the underwater friends readers make. 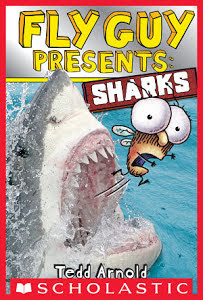 A part of another bestselling series, Fly Guy Presents, Fly Guy Presents: Sharks (written by Ted Arnold) takes young readers through a colorful animated and real photo adventure to learn about all kinds of sharks.

A little boy, Buzz, and his pet, Fly Guy, visit the aquarium to see and learn about sharks. There they see the Gray Reef Shark and Leopard Shark just for starters. Buzz and Fly Guy share cool photos of sharks' gills and teeth in a collage style layout, much like a scrapbook of awesome shark facts. Kids who may be afraid of sharks can learn more about them and maybe not be so scared anymore. Kids who love sharks can learn even more about the big fish they love so much, including how and what they eat. To be honest, my thirty-five year old husband has read through the book several times. My one and half year old loves looking at the photos, and the book helped him not be so scared when we saw sharks at the aquarium this year. 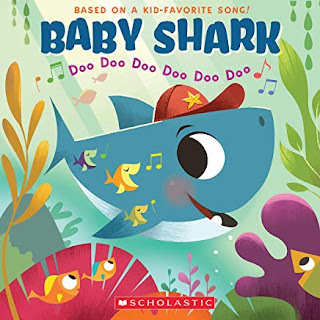 I don't know about you, but I can't go one day without hearing the Baby Shark song on YouTube Kids or getting the song stuck in my head. The popular song comes to life in Baby Shark.

What is cool about the book is that young learners can see the words to the song up close and stop and see the illustrations that go along with the words, which is awesome for young learners. For kids who know the song, they can learn to spell the words and learn the motions to the videos. At the end of the book is a visual guide to the hand (dance) steps to the song. If you thought the song was being played everywhere, you were right, and now the hit song can be enjoyed by readers too! 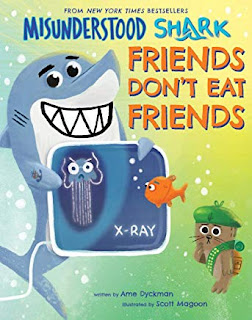 In the follow-up to last year's Misunderstood Shark, Misunderstood Shark: Friends Don't Eat Friends (written by Ame Dyckman and illustrated by Scott Magoon) looks at what it takes to be a good friend, an important lesson for young children.

On the previous episode of the book's show Underwater World with Bob, Shark ATE Bob--that's right, Shark at the host of the show, and once Shark burps up Bob in this book, Bob is not happy with how Shark treated his friend. Because friends don't eat friends. While Bob is upset and ranting at Shark, other friendly creatures are trying to keep Bob on script, which makes the book even more hilarious. Reading the book feels like you're a part of a comedy. All the while, young readers are learning about sharks, like how sharks don't have any bones! In the end, both Shark and Bob realize what it means to be true friends and forgive each other--what a lesson for kids and readers of all ages!
at July 18, 2019