(Best of 2017 So Far) Nemesis by Brendan Reichs 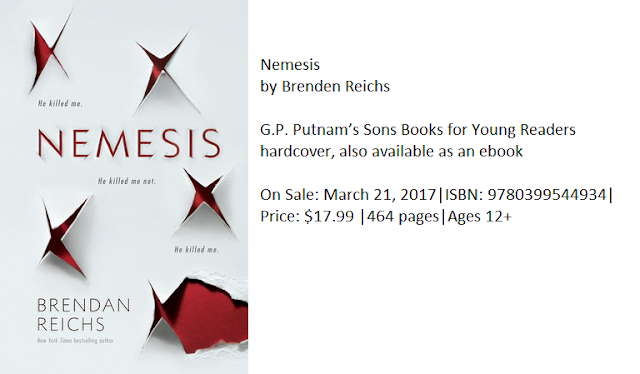 Orphan Black meets Lord of the Flies in this riveting new thriller from the co-author of the Virals series.

It's been happening since Min was eight. Every two years, on her birthday, a strange man finds her and murders her in cold blood. But hours later, she wakes up in a clearing just outside her tiny Idaho hometown—alone, unhurt, and with all evidence of the horrifying crime erased.

Across the valley, Noah just wants to be like everyone else. But he’s not. Nightmares of murder and death plague him, though he does his best to hide the signs. But when the world around him begins to spiral toward panic and destruction, Noah discovers that people have been lying to him his whole life. Everything changes in an eye blink.

For the planet has a bigger problem. The Anvil, an enormous asteroid threatening all life on Earth, leaves little room for two troubled teens. Yet on her sixteenth birthday, as she cowers in her bedroom, hoping not to die for the fifth time, Min has had enough. She vows to discover what is happening in Fire Lake and uncovers a lifetime of lies: a vast conspiracy involving the sixty-four students of her sophomore class, one that may be even more sinister than the murders.
Overall Thoughts
This definitely isn't your average YA book and borderlines on horror (which is great, in my opinion). The premise that Min is murdered every two years on her birthday (and comes back) is a pretty original YA plot these days. The frightening part isn't necessarily that she knows it's going to happen so much as she can do absolutely nothing to stop the man in black. As if the plot wasn't unique enough, there's also an impending asteroid heading toward Earth, which makes Min's anxiety surrounding her "death" even more imminent (and also helps to keep the pace of the novel at a fever pitch). The structure of the novel varies between Min's narrative (including flashbacks that serve as pieces to the overall puzzle) and switching points of view with Noah (who has issues all his own but that are more connected to Min than either of them realize). In the end, and knowing there's a sequel coming next year, Nemesis becomes part of one of the YA series that you can't wait to re-read while waiting on the next journey.
About the author 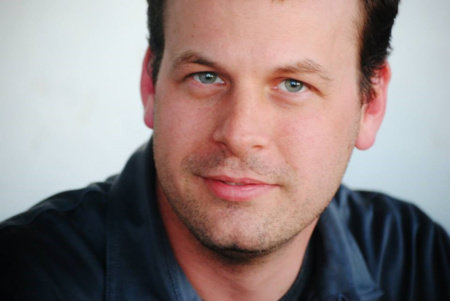 Brendan Reichs was born and raised in Charlotte, North Carolina. He graduated from Wake Forest University in 2000 and The George Washington University School of Law in 2006. After three long years working as a litigation attorney, he abandoned the trade to write full time. He is the author of the New York Times bestseller Nemesis, and co-author of the Virals series, written with Kathy Reichs. Brendan lives in Charlotte with his wife, son, daughter, and a herd of animals that tear up everything.
Click to Pre-Order Book 2! 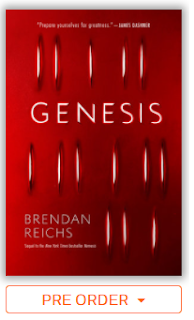 "Prepare yourselves for greatness." -James Dashner, #1 New York Times bestselling author of The Maze Runner series.
Can the Fire Lake sophomore class survive in a world without consequences?
Noah Livingston knows he is destined to survive.
The 64 members of Fire Lake's sophomore class are trapped in a place where morals have no meaning and zero rules apply. But Noah's deaths have trained him-hardened him-to lead the strongest into the future ... whatever that may be. And at any cost.
Min Wilder knows that survival alone isn't enough.
In a violent world where brute force passes for leadership, it's tempting to lay back and let everyone else battle it out. But Min's instincts rebel against allowing others to decide who lives and who dies. She's ready to fight for what she believes in. And against whomever might stand in her way.
Lord of the Flies meets The Matrix in Brendan Reichs's follow-up to the instant New York Timesbestseller Nemesis.

Review: Insignificant Events in the Life of a Cactus

“Aven is a perky, hilarious, and inspiring protagonist whose attitude and humor will linger even after the last page has turned.” —School Library Journal (Starred review)
Aven Green loves to tell people that she lost her arms in an alligator wrestling match, or a wildfire in Tanzania, but the truth is she was born without them. And when her parents take a job running Stagecoach Pass, a rundown western theme park in Arizona, Aven moves with them across the country knowing that she’ll have to answer the question over and over again.
Her new life takes an unexpected turn when she bonds with Connor, a classmate who also feels isolated because of his own disability, and they discover a room at Stagecoach Pass that holds bigger secrets than Aven ever could have imagined. It’s hard to solve a mystery, help a friend, and face your worst fears. But Aven’s about to discover she can do it all . . . even without arms.
Overall Thoughts
There are not enough books out there that deal with the sensitive subjects that Bowling covers in her new debut Middle Grades novel. Aven (what an awesome name by the way) is as unique and charming as the Stagecoach Pass setting. Middle grades readers will love the mysteries surrounding the Stagecoach Pass as Aven and Connor bond over their disabilities. Aven's eclectic personality enhances the stories she tells as she meets new people, making it impossible not to fall in love with her. Middle school is one of the toughest parts of growing up, and Bowling sheds light on dealing with disabilities and finding peers who are truly caring and supportive. While the ending does become a bit predictable, the characters carry an endearing quality all the way through.
About the author