Review: Serafina and the Splintered Heart by Robert Beatty 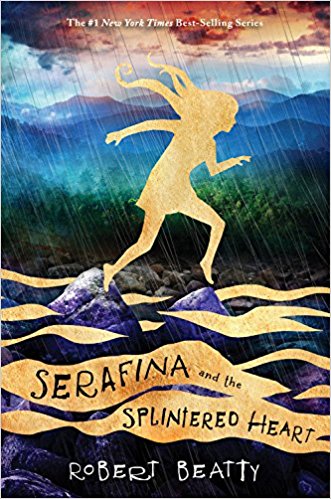 The storms are coming....Something has happened to Serafina. She has awoken into a darkness she does not understand, scarred from a terrible battle, only to find that life at Biltmore Estate has changed in unimaginable ways. Old friends do unthinkable things and enemies seem all around. A mysterious threat moves towards Biltmore, a force without a name, bringing with it violent storms and flooding that stands to uproot everything in its path. Serafina must uncover the truth about what has happened to her and find a way to harness her strange new powers before it's too late. With only days to achieve the impossible, Serafina fights to reclaim herself as the Guardian of Biltmore, friend of Braeden, daughter of her Pa, and heroine of the Blue Ridge Mountains and all the folk and creatures that call it home. In the epic third installment of Robert Beatty's #1 bestselling series, Serafina takes her rightful place among literary champions as she battles fiercely to defend all she loves and become everything that she is meant to be.

I have been eagerly awaiting the highly anticipated third book in Robert Beatty's hit Serafina series, and today is the day! [HIT THE JUMP FOR MORE]

Splintered Heart begins with non-stop, heart-pounding action and Beatty doesn't let his foot off of the gas. Serafina awakes in a cold, dark coffin, buried deep beneath the ground, and she has no clue how she got there. At first in a panic, Serafina thinks of her Pa and immediately begins to think about how to logically get out of this situation. Using her tattered, blood-stained dress, Serafina remembers with her Pa said about weak boards, and anxiously makes her way out of her burial ground. But why was she buried in the first place? Who put her there?

Desperately trying to make her way back to Biltmore House, Serafina begins to remember her last night at Biltmore when she was attacked by a black shadow. Now it seems many days, perhaps months have passed since her kidnapping...or murder. As she attempts to reach the edges of the Estate, Serafina witnesses strange creatures who try to attack her, an apparent sorcerer who can feel her but not see her, and yet she still is able to quickly escape these dangers.

Searching for her best friend Braeden, her Pa, or the Vanderbilts, Serafina realizes there is a party going on, and she wonders why she's not there. But nothing is adding up. The passage of time, the wax and wane of the moon, nothing makes sense to her. Finally she sees Braeden, who is now much different than before, and he has a secret she would never have guessed.

Easily read one sitting, it is impossible to put down this book (much like Black Cloak and Twisted Staff). Beatty has crafted a new series that brings readers into a world where adventure never ends, and Serafina must call on all of her friends (old and new) to save Biltmore Estate, and their lives, from new dangers.

I can't wait for the next installment in this series! As I've said in previous Serafina reviews, the Southern setting is perfect for the series, especially in this story as Beatty goes a little darker with the content. I read it so quickly, I will have to re-read it immediately!
at July 04, 2017