The Best From the First Half of 2017: Pen Pals by Alexandra Pichard 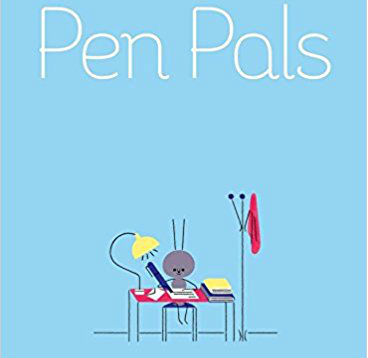 An octopus and an ant are paired up to write letters for a school project in this charming picture book in the tradition of Dear Mr. Blueberry. For an entire school year, Oscar the ant and Bill the octopus send letters to each other as part of a school project. Oscar loves table tennis, and Bill loves modelling clay. Oscar does judo, while Bill has a garden. Despite their differences, the two new friends find shared interests…all leading up to one final surprise!
Hit the jump for more!

Alexandra Pichard born in 1985 in Poitiers. Graduated from the Ecole Supérieure des Arts Décoratifs in Strasbourg in 2009, I published the same year my first album, Herman and Dominique , published by Thierry Magnier. I have illustrated several books for youth by Éditions Hélium, Autrement, Flammarion, Magnard, Gallimard and worked for the adult press (magazine XXI, The New York Times). My last book, Third branch on the left, was published by Les Fourmis Rouges in 2015.
Brief Review
Pen Pals are definitely popular among elementary aged children today. As a high school teacher, we have service clubs where students become pen pals with younger children. In the text messaging and Snapchat era (can we even say e-mail anymore?), writing letters has certainly become a lost art. As an English teacher, I can appreciate Pen Pals so much more because writing is so important today.

Separated by schools, Oscar the Ant and Bill the Octopus become pen pals and share their hobbies and daily routines. For example, Bill shares that he found an entire bottle of sunscreen at the beach the previous year, while Oscar shares his love for Judo. Though they don't have much in common, they become interested in each other's lives. Bill is especially adorable as he requests that Oscar writes a little bigger so that he can read the words better.

The images and illustrations (both created and real) pop off the page with bright yellows and blues, drawing the reader's eye to each corner of the page. I do wish the letters, since writing seems to be the focus here, were actually handwritten to add to the appeal. But there's nothing lost as far as story with the letters being typed.

Overall, a nostalgic nod to stationary and stamps that we seem to be missing in our technological age.