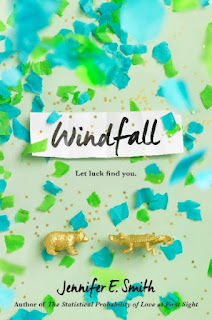 
Alice doesn’t believe in luck—at least, not the good kind. But she does believe in love, and for the last few years, she’s been pining for her best friend, Teddy. She and he are alike: both are outsiders, both know tragedy. She lost both her parents when she was nine and now lives with her cousin.

Teddy’s mother is barely able to hold it all together, forced to grapple with the weight of gambling debts incurred by his father, who abandoned them years ago.

Then, on Teddy’s eighteenth birthday, Alice buys him a lottery ticket, and to their astonishment, he wins $145 million. In an instant, their lives are completely upended. But what at first seems to be a blessing soon starts to feel like a curse. As Alice and Teddy deal with the ripple effects caused by that one little ticket, they learn more about themselves than they ever could have imagined, and about the unexpected ways in which luck and love sometimes intersect. Now if only Teddy can see through his windfall and back to the ones who love him.
Hit the jump for an exclusive Q and A!

JENNIFER E. SMITH (@JenESmith) is the author of seven novels for young adults, including The Statistical Probability of Love at First Sight. She earned a master’s degree in creative writing from the University of St. Andrews in Scotland and spent years working as an editor on a number of bestselling books, including Ballantine’s New York Times bestseller Tell the Wolves I’m Home. Her work has been translated into thirty-three languages, and four of her novels are currently in development for film. She lives in New York City.

Exclusive Q and A with Jennifer E. Smith

1. How does Windfall compare to your previous books, as far as the writing process? Was this book easier to write? More difficult?

It was more difficult in a lot of ways. Many of my other books are very compressed, whether in terms of the time frame or the scope. With The Statistical Probability of Love at First Sight, for example, it was just two characters meeting on an airplane over the course of twenty-four hours. Hello, Goodbye, and Everything in Between was even shorter – just one night. But Windfall is set over several months, and it also has a bigger cast – it’s not just about Alice and Teddy, but also Alice’s cousin Leo, and her aunt and uncle, Sofia and Jake, and Teddy’s mom, Katherine, and various other characters. So the lens was wider in that way, and the book also goes a bit deeper than some of my previous ones, exploring some big questions about love and luck and fate. Which meant the process was tougher in some ways. But it felt really good to challenge myself, and I’m very proud of the final result!

2. How will readers be able to connect to Alice and Teddy's characters?

These are honestly two of my favorite characters I’ve ever written. They’re both flawed, but they also have such big hearts. And while I loved the more romantic parts, it was also so much fun to have them argue and banter and challenge each other throughout the story as they try to navigate this huge curveball that’s been thrown into their lives.

When you first meet Alice, she’s a little bit cautious. As a kid, she won the worst kind of lottery imaginable when her parents died a year apart from each other. Because of that, she’s understandably wary of change. So when Teddy wins the lottery – off a ticket she bought for him – it really turns everything upside down.

As for Teddy, he’s funny and charming and sometimes you just want to take him by the shoulders and shake him, but he’s a good guy at heart. I wanted to write realistically about what would happen if an 18-year-old senior in high school won 140 million dollars, so it definitely goes to Teddy’s head a little bit, at least at first. But to him, this money seems like the solution to all his problems. His dad left a few years ago after gambling away all their savings, so the money feels like magic. Unfortunately, he learns pretty quickly that it also makes everything a lot more complicated.

This was the first time I’ve written about a friendship that turned into something more, and I think Alice and Teddy’s relationship would’ve been a lot of fun to write even if there hadn’t been a 140-million-dollar wrench thrown into it. I really love both these characters, and I hope you will too.

I would definitely travel! There’s a quote from Zelda Fitzgerald that I’ve always loved: “I hate a room without an open suitcase. It seems so permanent.” That’s definitely how I feel too. My passport never stays tucked away for too long as it is, but if I won the lottery, I’d definitely wear that thing out. I’d also want to buy a little cottage in Scotland, which is my favorite place in the world. And I’d love to do something similar to what Teddy does in the book, which is to help make other people’s dreams come true...because how amazing would it be to have the ability to grant wishes for all your family and friends? And of course, I’d also want to give a lot of it to charity. There are so many important causes out there, and so many people in need, and I’m a firm believer that we have a responsibility to help others. Especially now. So it would be a real joy to be able to make more of a difference.