Our Own Private Universe by Robin Talley 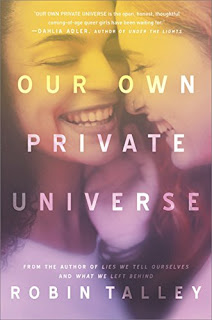 
Fifteen-year-old Aki Simon has a theory. And it's mostly about sex.
No, it isn't that kind of theory. Aki already knows she's bisexual—even if, until now, it's mostly been in the hypothetical sense. Aki has dated only guys so far, and her best friend, Lori, is the only person who knows she likes girls, too.
Actually, Aki's theory is that she's got only one shot at living an interesting life—and that means she's got to stop sitting around and thinking so much. It's time for her to actually do something. Or at least try.
So when Aki and Lori set off on a church youth-group trip to a small Mexican town for the summer and Aki meets Christa—slightly older, far more experienced—it seems her theory is prime for the testing.
But it's not going to be easy. For one thing, how exactly do two girls have sex, anyway? And more important, how can you tell if you're in love? It's going to be a summer of testing theories—and the result may just be love.


Robin Talley’s first novel, Lies We Tell Ourselves (Harlequin Teen, 2014), about two girls on the front lines of the school desegregation battle in 1959 Virginia, was on the short list for the CILIP Carnegie Medal and a finalist for the Lambda Literary Award. Her second young adult novel, What We Left Behind (Harlequin Teen, 2015), a contemporary story about love and identity, was called a “must-read” in a starred review from School Library Journal. Her newest novel, As I Descended (Harper Teen, September 2016), is a retelling of Macbeth centering around a girl/girl couple who set out to take down their boarding school’s resident queen bee. In a starred review, Kirkus said, “This adaptation’s bewitching intrigues and enthralling deceptions will whet the daggers of any reader’s mind.” Robin lives in Washington, D.C., with her wife and their daughter, plus an antisocial cat and a goofy hound dog. You can find her on the web at www.robintalley.com or on Twitter at @robin_talley.

Being a teenager inherently comes with questioning one's identity, and there's probably no better author to explore those issues that Robin Talley. As we celebrate the Women's March on Washington today, it's important to look at all of the issues that girls face, including those that Aki and Christa encounter.

Surrounded by religion, Aki doesn't quite know how to understand and express her sexuality. She decides to go with her older brother and her father (who is a minister by the way) on a mission trip to Mexico. There, she begins to realize who she really is and who she wants to be. The book becomes not such a questioning of identity so much as an acceptance, which is rare.

There are so many LGBTQ issues in the United States right now, so it's nice to see a book out there for young adults who may be facing the same future as Aki. The fact that Aki is African-American also opens the discussion to not only questions of sexuality but those of sexuality and race.

Overall, Talley's book stands out, not only for its distinct characters, but for its exploration into an issue that is not widely accepted or examined in the real world.