Blog Tour: Exclusive Excerpt from Infinity of You + Me by JQ Coyle 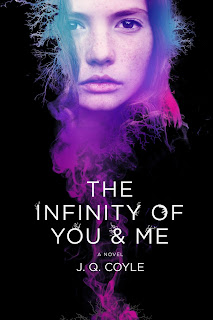 “A fantastically fun mind-bender from start to finish, THE INFINITY OF YOU & ME will thrill its readers and leave them hungry for more.”—Karen Akins, author of Loop and Twist

When two highly talented writers team up to write a novel, magical universes appear. THE INFINITY OF YOU & ME (St. Martin’s Press; November 8, 2016) is no exception: written under the pen name J.Q. Coyle—composed of publishing veterans Julianna Baggott and Quinn Dalton. Baggott’s YA novels have been highly praised, including a People’s Pick, and her adult novels include several New York Times Notables, while Dalton is an acclaimed writer with four novels and story collections under her belt. In the tradition of Baggott’s Pure trilogy, THE INFINITY OF YOU AND ME grounds a “multiverse” adventure in the very real world. Fast-paced with a tightly spun plot, this young adult novel will enthrall even the most reluctant readers.

Almost fifteen, Alicia is smart and funny with a deep connection to the poet Sylvia Plath, but she’s ultimately failing at life. With a laundry list of diagnoses, she hallucinates different worlds—strange, decaying, otherworldly yet undeniably real worlds that are completely unlike her own with her single mom and one true friend. In one particularly vivid hallucination, Alicia is drawn to a boy her own age named Jax who’s trapped in a dying universe. Days later, her long-lost father shows up at her birthday party, telling her that the hallucinations aren’t hallucinations, but real worlds; she and Jax are bound by a strange past and intertwining present. This leads her on a journey to find out who she is, while trying to save the people and worlds she loves.

This novel explores the ideas of choiceand destiny. Baggott says, “We created a concept that explains that feeling of being haunted by the path you didn’t take, a concept that explores some natural human emotions like regret, nostalgia, a grief for the life unlived.” This concept influences the world-building within the novel, making it complex yet thoughtful.

The dynamic duo behind J.Q. Coyle make THE INFINITY OF YOU & ME a wild ride through unruly hearts and vivid worlds guaranteed to captivate. Smart and magical, this novel will catch hold of any reader, young or old.


J.Q. COYLE is the joint pen name of Julianna Baggott and Quinn Dalton. Quinn is an acclaimed writer who has published
two short story collections and two novels. Julianna is the author of over twenty novels, including Pure, a New York Times Notable (2012).

THE INFINITY OF YOU AND ME:

Hit the Jump for an Exclusive Excerpt

The beginning is always a surprise. (The endings are, too.)
I never quite know what I look like. I’m myself, yes, but differ- ent. Never tall and leggy, but my hair might be long and tied back or cut in a short bob. Sometimes I’m in jeans and sneakers. Once or twice, a dress.
I’ve been alone in a field of snow.
I’ve woken up in the backseat of a fast car at night, my father driving down a dark road.
I’ve been standing in the corner at a party where none of the faces are familiar.
This time, noise comes first. A clanging deep inside the hull of a ship—a cruise ship. I’m running down a corridor of soaked red carpet.
The ship lurches.
Someone’s yelling over the crackling PA speakers—I can’t understand the words over the rush of water. Alarms roar over- head.

I shoulder my way down another corridor, fighting the flood of people running in the opposite direction, screaming to each other.
Some part of my brain says, Me? On a cruise ship? Never. But if I was so lucky, it’d be a sinking one.
The rest of my brain is sure this isn’t real, no matter how real it feels.
I run my hand down the wall, the cold water now  pushing against my legs. I’m wearing a pair of skinny jeans I don’t own. I know someone’s after me—I just don’t know who. I look back over my shoulder, trying to see if anyone else is moving against the crowd like I am.
No one is.
Where’s my mother? She’s never here when I go off in my head like this.
A man grabs me roughly by the shirt. My ribs tighten. Is this who I’m running from?
No. He’s old, his eyes bloodshot and wild with fear. He says something in Russian, like the guys in the deli at Berezka’s, not too far from my house in Southie. I shouldn’t be able to understand him, but I do. “Run! This way. Do you want to die, girl?” I don’t speak Rus- sian. I’m failing Spanish II.
But then I answer, partly in Russian. “I’m fine. Thank you. Spasiba.” The words feel stiff in my mouth. I can barely hear myself over the screaming, the water rushing up the corridor, and the groaning ship.
The man keeps yelling, won’t let go of me, so I rip myself loose and run.
A glimpse of gray through a porthole, only a sliver of land and heavy dark sky.
I see myself in the porthole’s dark reflection—my hair chin length, my bangs choppy, just a bit of faded red lipstick.

We’re on the Dnieper River. It’s like this: I know things I shouldn’t. I don’t know how.
A woman falls. I reach down and help her up. Her head is gashed, her face smeared with blood. She nods a thank-you and keeps march- ing against the current, soaked.
I wonder if she’ll make it. Will I?
I’m looking for my father. I want to call out for him, but I shouldn’t. The people chasing me are really after him—I know this too, the way you know things in a dream.
The ship lists, hard, and my right shoulder drives into a wall. Stateroom doors swing open. The sound of water surging into the hull is impossibly loud.
And then my father appears up ahead—shaggy, unshaven, his knuckles bloody. I love seeing him in these hallucinations. (That’s what my therapist calls them.) It’s the only time I ever see him. I even love seeing him when he looks like hell, and older than I re- member him, more worn-down. But he always has this energy— like his strength is coiled and tensed.
“Alicia!” he shouts. “Down!”
I fall to my knees. The water is up to my neck and so cold it shocks my bones.
My father raises a gun and fires. Some men fire back.
I put my head underwater, and the world is muted. I hold my breath, can only hear my heart pounding in my ears. My face burns with the cold, my back tight, lungs pinched. I swim toward the blurry yellow glow of an emergency light.
When I lift my head, a tall and angular man slides down a wall and goes under, leaving a swirl of blood. My father shot him. This should shock me, but it doesn’t. My father, who’s really a stranger to me, is always on the run and often armed.

Another man, thick necked and yelling, returns fire from a cabin doorway.
My father disappears around the corner up ahead, then lays cover for me. “Get up!” he shouts. “Move now!”
I push through the icy water, wishing my legs were stronger and tougher, feeling small and easily kicked off-balance.
“Just up ahead,” he says, “—stairs.”
But then a little boy with a buzz cut doggy-paddles out of a cabin. The water’s too deep for him.
I reach out, and he grabs my hand, clinging to my shirt. “Alicia, get down!” my father yells.
Instinctively, I shield the kid. A gunshot.
I feel a shattering jolt in my shoulder blade. I can’t breathe, can’t scream.
The boy cries out, but he hasn’t been shot. I have. The pain is stabbing. “He shot me!” I shout, shocked. I can only state the obvi- ous, my voice so rough and ragged I don’t even recognize it.
My father pulls me and the boy into a tight circular stairwell, the water whirling around us, chest deep. As he lifts the little boy high up the stairs, I glimpse the edge of a tattoo and skin rough with small dark scars and fresh nicks on his wrists. “Keep climbing!” he says to the little boy.
Wide-eyed with fear, the boy does what he’s told.
The water is rising up the stairs, fast, but my father props me up with his shoulder, and we keep climbing. I try to remember what it was like before he left my mom and me. Did he carry me to bed, up the stairs, down the hallway, and tuck me in?
“We’re going to get out,” my father says. “We can jump.” “We can’t jump,” I say. Off the ship?
“Trust me,” my father says.

I’ve never trusted my father, never had the chance. After he left, he wasn’t allowed within five hundred feet of me or my mother. “What the hell am I doing here?” I ask.
My father stares at me. “Is it you? Really you?” “Yes, it’s me,” I say. Of course it’s me!
My father looks stunned and scared and relieved somehow all at the same time. “You’re finally here.”
“Finally where?”
“Things have gotten too dangerous,” he says quickly. He reaches into his pocket, and in his hand I glimpse what looks like a strangely shaped shiny wooden cross about the width of his palm, but it’s not a cross, not exactly. “You’ve got to get lost and stay lost.”
I am lost, I want to tell him, but the pain in my back is so sharp it takes my breath.
As the water pushes us up the stairwell, my blood swirls around me like a cape. I can’t die here.
I look up into cloudy daylight.
The ship’s listing so hard now it seems to be jackknifing. Sud- denly I’m terrified we’re all going to drown.
I expect to see the little boy’s face at the top of the stairs, but he’s gone. Instead, there’s a group of men with guns trained on my father and me.
“Ellington Maxwell.” The man who speaks is the one who shot me. In the hazy glare off the water I see a jagged scar on his cheek. “Welcome to our world. This time we hope you stay awhile.”
I look up at the sky again and abruptly it swells with sun. My right hand hurts and I know this signals an ending . . . Bright, blaz- ing, obliterating light.