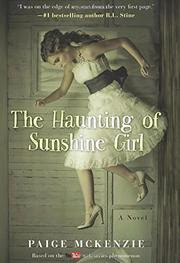 The Haunting of Sunshine Girl by Paige McKenzie

Paige McKenzie, the irresistible face of The Haunting of Sunshine Girl, is thrilled to bring her unique voice to life in a book series. At the age of sixteen, McKenzie teamed up with producer Nick Hagen and her mother, actress Mercedes Rose, to create The Haunting of Sunshine Girl on YouTube. Soon the spine-chilling series—and its unforgettable title character—boasted a viewership in the tens of millions. McKenzie was recently named one of Seventeen magazine’s “Pretty Amazing” finalists. She lives in Portland, Oregon.


Shortly after her sixteenth birthday, Sunshine Griffith and her mother, Kat, move from sunny Austin, Texas, to the rain-drenched town of Ridgemont, Washington. Though Sunshine is adopted, she and her mother have always been close, sharing a special bond filled with laughter and inside jokes. But from the moment they cross the Washington state line, Sunshine feels her world darken with an eeriness she cannot place. And even if Kat doesn’t recognize it, Sunshine knows something about their new house is just…creepy.

On their first night in Ridgemont, Sunshine is awakened by the sound of footsteps coming from above, followed by a child’s ghostly laughter. In the days that follow, things just get more frightening. But Kat seems oblivious to the terror, insisting that Sunshine’s imagination is getting the best of her. Determined to prove her mother wrong, Sunshine begins taking photographs, desperate to catch evidence of the supernatural presence. At her new school Sunshine meets Nolan Foster, a cute—if slightly bookish—classmate. Nolan also has a passion for photography—and, more importantly, for ghosts. He offers to help Sunshine figure out exactly what’s going on.

What they uncover is a story that’s much bigger and runs deeper than they could have imagined. She can hardly believe it, but as the spirits haunting her house become stranger—and it becomes clear that Kat is in danger—Sunshine learns that everything she thought she knew about her past has been wrong.
Reminiscent of Twilight as far as locations go, McKenzie's story is truly original. Having been to Austin myself (though not to Washington), I would definitely be dismayed to leave the carefree, music-loving, Drafthouse viewing life of Austin to move to the endlessly rainy Northwest (though I hope to visit Seattle in the next two years). But since Sunshine and her mother, Kat, are very close, the move isn't so bad. Of course, no one wants to wake up in the middle of the night to the sound of footsteps, let alone the light footfalls of an undead child.

It is very difficult to be so successful in one area (YouTube for McKenzie) and translate that success to another medium (in this case part one of a series); however, McKenzie accomplishes that and so much more. Unlike the last few books on this Halloween book list, this horror story is more subtle and nuanced. McKenzie takes her time to develop Sunshine, Kat, and Nolan as characters, and she allows the secrets of Sunshine's past slowly unfold. McKenzie isn't trying to keep you up at night, but she's hoping you take Sunshine and the spirits that follow her into your dreams.

Having grown up on Fear Street novels (five at time if I could get away with it at the library), Sunshine fits right into the suspenseful, page-turning world of horror. She already planted the seed with YouTube, but her series revitalizes the genre in prose.