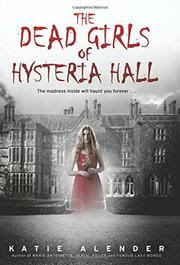 "A really scary and original ghost story, well told. Read it with the lights on."--Kirkus Reviews

The Dead Girls of Hysteria Hall by Katie Alender


Delia's new house isn't just a house. Long ago, it was the Piven Institute for the Care and Correction of Troubled Females, an insane asylum nicknamed "Hysteria Hall." However, many of the inmates were not insane, just defiant and strong-willed...kind of like Delia herself.
But the house still wants to keep "troubled" girls locked away, and it traps Delia in a horrifying way.
Ghost girls wander the hallways in their old-fashioned nightgowns. A handsome ghost boy named Theo roams the grounds. Delia learns that all the spirits are unsettled and full of dark secrets. The house harbors shocking truths within its walls, truths that only Delia can uncover, which may set her free.
She'll need to act quickly, before the house's power overtakes everything she loves.

While it's cliche to call this book a page turner, it is, and the suspense is non-stop. Similar to many stories, Delia inherits a house, and she and her family move in quickly. Not wasting any time, Alender amps up the suspense as it turns out that the house used to be an insane asylum. Still pretty familiar as scary stories go. Trapped, Delia must save her family, and the house will allow the family to leave; unfortunately, that same fate doesn't await Delia. This is where the story comes alive and really begins to take on an arc of its own. Delia meets several ghosts of the house, some friendly, some not in her attempt to understand the history and people of the frightening dwelling. It's easy to root for Delia, and it's eerily fascinating to encounter the other "characters" of the book.

I always share the most exciting books that I read to my students, and especially since it's October, I couldn't wait to tell them about Delia and her story! Needless to say, the book didn't stay on my shelf long.
at October 04, 2016