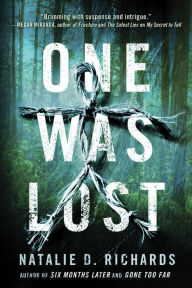 "If you enjoy fast paced thrillers with a plot line you can really get lost in, then definitely pick up One Was Lost by Natalie D. Richards! It comes out in October, just in time for Halloween, so mark it on your calendar and prepare to get lost!"--Under the Book Cover

One Was Lost by Natalie D. Richards

For fans of In a Dark, Dark Wood and Survive the Night comes a pulse-pounding, psychological thriller from the author of Six Months Later.
Damaged, Deceptive, Dangerous, Darling. When a group of teens wake up in the woods, these words are inked onto their skin. Are they labels? A warning? They must find the truth before a killer finds them.
While on a mandatory senior field trip, a flash flood cuts off Sera and three classmates from their group with no way to call for help. But they're not as alone as they thought...

School Library Journal
09/01/2016Gr 9 Up—A school hiking trip turns deadly in Richards's dark, contemporary stand-alone thriller. Participation in a hike through the West Virginia woods is mandatory for graduating high school seniors. Sera's misery is compounded by Lucas, the crush she's avoided. A flash flood strands the campers and their teachers Mr. Walker and Ms. Brighton on either side of a river. The next day, Sera wakes up from a drugged sleep, discovering evidence that the campers were attacked. Mr. Walker is found unconscious, and the campers are marked on their wrists: Jude, Deceptive; Emily, Damaged; Lucas, Dangerous; and Sera, Darling. Someone is targeting them for crimes, imagined or real, and they must work together to survive the hunt. Richards delivers a solid page-turner for readers who want to keep the lights on all night. With its predatory atmosphere, this book feels like The Breakfast Club folded into a Christopher Pike novel's fight for survival. The characters' ethnicities are refreshingly inclusive. However, the plot suffers from a weakness that holds it back from rising above average. The backstory behind the attack is based on a ghostly tale that readers are never sufficiently privy to, weakening the tension and at times causing actual confusion. The attacks are quite graphic and may be unsuitable for sensitive readers. VERDICT An enticing thriller that, despite some defects, remains a general purchase recommendation.—Jessica Bushore, formerly at Shelf Awareness, Xenia, OH
at October 29, 2016