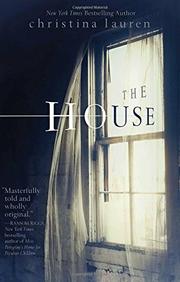 "Don't read it at night."--Kirkus Reviews

The House by Christina Lauren

After seven years tucked away at an East coast boarding school, Delilah Blue returns to her small Kansas hometown to find that not much has changed. Her parents are still uptight and disinterested, her bedroom is exactly the way she left it, and the outcast Gavin Timothy still looks like he’s crawled out of one of her dark, twisted drawings.
Delilah is instantly smitten.
Gavin has always lived in the strange house: an odd building isolated in a stand of trees where the town gives in to mild wilderness.  The house is an irresistible lure for Delilah, but the tall fence surrounding it exists for good reason, and Gavin urges Delilah to be careful. Whatever lives with him there isn’t human, and isn’t afraid of hurting her to keep her away.

“A rebellious girl falls for a strange boy who lives in an even stranger house. This superior and unusual horror story opens with Delilah, who feels neglected by her unfeeling parents. She’s attracted to Gavin, who has lived quite differently: he was raised by the house he dwells in, a living being that loves him and cares for him. He communicates with House and its various parts, such as Fireplace, which tends its own fire, Bed, which stretches at his request, and Piano, which taught him how to play music. He has no idea what happened to his mother, only that House has always cared for him, serving him abundant food and giving him toys. When he brings Delilah home, and she asks where he wants to go to college, the room becomes colder. House clearly doesn’t like Delilah, but leaving it isn’t going to be so easy. With great secrecy, they begin to plan their escape. Things will, of course, go horribly wrong. Lauren (a joint pen name for Christina Hobbs and Lauren Billings) taps into classic haunted-house memes, drawing those ideas to the max as they imbue House with a distinct, sinister personality. Intrigue builds, and suspense slowly creeps in as readers begin to realize the extent to which House can control events, and the real danger in which the teens find themselves constantly ratchets up.” 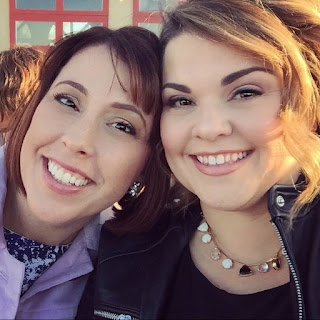 From the Christina Lauren website: Yes, there are two of us! Lauren (on the left) and Christina (on the right).
Christina Lauren is the combined pen name of long-time writing partners/besties/soulmates/brain-twins Christina Hobbs and Lauren Billings. The coauthor duo writes both Young Adult and Adult Fiction, and together has produced fourteen New York Times bestselling novels. They are published in over 31 languages, have received starred reviews from Kirkus, been selected as one of NPR’s Top 100 Swoon-Worthy Romances, and won both the Seal of Excellence award and Book of the Year from RT Magazine.
at October 23, 2016