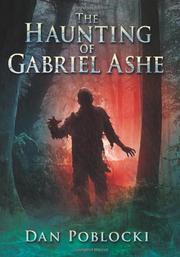 The Haunting of Gabriel Ashe by Dan Poblocki


Has Gabriel created a monster?
Something sinister lurks in the woods outside of Slade.
Gabe has seen it, or he thinks he has - a shadow standing at the tree line, watching Gabe's house with faintly glowing eyes.
Despite Gabe's misgivings, his new friend, Seth, relishes the creepy atmosphere of the forest. It's the perfect setting for his imaginary struggle against the Hunter, a deformed child-eating creature said to leave the bones of his victims in his wake. It's just a game, but it's all a bit much for Gabe, who quickly loses interest as summer ends and the days grow shorter.
But then strange things start to happen. Frightening things. And Gabe knows it has to do with the dark figure watching him from the edge of the woods.
Is Seth out to teach Gabe a lesson? Or is the Hunter more than just a myth? Gabe isn't sure which option is more horrifying, but he's determined to learn the truth before someone gets hurt . . . or worse.


The perfect ghost story for Halloween, Poblocki delivers a frightening tale of the imaginary vs. the real. Which defines Gabriel Ashe's current situation?

It's never easy to move as a teenager, but sometimes, it's the best thing for a family. For Gabriel, he and his family must move to Massachusetts. The hardest part about moving? Making new friends. Gabriel quickly befriends his neighbor Seth, and the two seem to be bonding well. As most middle school boys do, Gabriel and Seth create a fantasy world much different from their realities. Deep in the woods, Gabriel and Seth take on new personas.

The second hardest part about moving? Going to a new school; however, most of the students seem to be taking well to Gabriel. Unfortunately, they don't care so much for Seth. Becoming a little like Nightmare on Elm Street, the lines between reality and fiction begin to blur, as the creature the boys created in the woods, the Hunter, seems to be real, or at least something is tormenting their classmates.

A non-stop thriller that doesn't lose its punch after the climax leaving the reader with an ending that is utterly shocking.