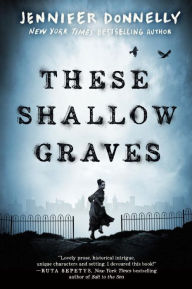 These Shallow Graves by Jennifer Donnelly

From the acclaimed New York Times bestselling author of A Northern Light and Revolution, comes a thrilling mystery that’s perfect for fans of The Cellar and Suicide Notes from Beautiful Girls. This is a story of dark secrets, dirty truths, and the lengths to which people will go for love and revenge.

Jo Montfort is beautiful and rich, and soon—like all the girls in her class—she’ll graduate from finishing school and be married off to a wealthy bachelor. Which is the last thing she wants. Jo dreams of becoming a writer—a newspaper reporter.

Wild aspirations aside, Jo’s life seems perfect until tragedy strikes: her father is found dead. The story is that Charles Montfort shot himself while cleaning his revolver, but the more Jo hears about her father’s death, the more something feels wrong. And then she meets Eddie—a young, smart, infuriatingly handsome reporter at her father’s newspaper—and it becomes all too clear how much she stands to lose if she keeps searching for the truth. But now it might be too late to stop. The past never stays buried forever. Life is dirtier than Jo Montfort could ever have imagined, and this time the truth is the dirtiest part of all.


It's difficult to be raised in a wealthy family where certain expectations hinder one's desire find one's true identity. It's even more difficult to find one's identity after the loss of a loved one. Seventeen year old Jo loses her father at the beginning of the book and begins an important adventure in her life.

Named for the classic character Jo in Little Women, Jo has literary aspirations of her own; however, because of her family's expectations of her, Jo is unsure of her ability to make writing her career as long as every move she makes is watched and criticized. Her family even has plans for her to marry. I haven't mentioned it until now, but it's the 1800s Manhattan, and the expectations I just mentioned are even more unrealistic for Jo in this time period.

Letting her curiosity and passion for writing get the better of her judgment, Jo embarks on a journey to solve her father's tragic death. The book was a lot more of a mystery novel that I first thought, and I enjoyed following Jo through the nineteenth century, though her young age really showed at times in the decision she makes.