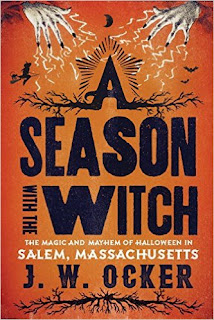 "[A] lively chronicle―part travel guide, part history lesson…Ocker moves easily among the archivists, historians, and performers he interviews, and he describes the carnival atmosphere that descends upon “Witch City” with enthusiasm and vividness."--Publisher's Weekly

A Season with the Witch: The Magic and Mayhem of Halloween in Salem, Massachusetts by J.W. Ocker


Edgar Award-winning travel writer spends an autumn living in one of America's spookiest tourist destinations: Salem, Massachusetts.
Salem, Massachusetts, may be the strangest city on the planet. A single event in its 400 years of history—the Salem Witch Trials of 1692—transformed it into the Capital of Creepy in America. But Salem is a seasonal town—and its season happens to be Halloween. Every October, this small city of 40,000 swells to close to half a million as witches, goblins, ghouls, and ghosts (and their admirers) descend on Essex Street. For the fall of 2015, occult enthusiast and Edgar Award–winning writer J.W. Ocker moved his family of four to downtown Salem to experience firsthand a season with the witch, visiting all of its historical sites and macabre attractions. In between, he interviews its leaders and citizens, its entrepreneurs and visitors, its street performers and Wiccans, its psychics and critics, creating a picture of this unique place and the people who revel in, or merely weather, its witchiness.


I have always been fascinated with Salem. Being an English teacher, The Crucible is high on my list of works to teach, especially around Halloween. I think I've researched as much about Salem without actually going there as possible, so I was beyond excited when I saw the listing for this book. Reading a first hand account of living in Salem, following the history, the lore, the Halloween season: sign me up! What a dream to be able to live in Salem for the entire month of October!! And what an awesome and supportive family to make the move with Ocker for this once in a lifetime experience.

What I appreciate the most about the book is that Ocker's experiences are so far-reaching. Not only does Ocker explore the historical aspect of Salem (how could you not?), but he also interviews lifelong citizens of Salem as well as the more eccentric (and twice as interesting) people of Salem. Of course there would be psychics and Wiccans in Salem, so why not take the opportunity to explore everything they have experienced in this historic and notorious place.

Ocker covers every piece of ground in Salem, highlighting key geographical areas and stories surrounding a particular place (with photos!). The book is successful at not reading like a history book but creating a narrative that explores history but maintains a creative prose.

If anything, Ocker makes me want to visit Salem even more. But how to visit in October when I teach in South Carolina? Maybe one day! Until then, I'll keep re-reading and live vicariously through Ocker's accounts.