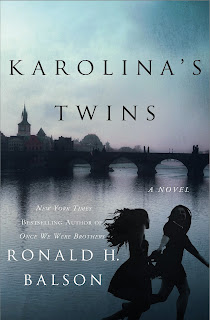 “Readers who crave more books like Balson’s Once We Were Brothers (2013) and Kristin Hannah’s bestselling The Nightingale (2015) will be enthralled by Karolina’s Twins.” —Booklist (starred review)

Lena Woodward, an elderly woman, enlists the help of both lawyer Catherine Lockhart and private investigator Liam Taggart to appraise the story of her harrowing past in Nazi occupied Poland. At the same time, Lena’s son Arthur presents her with a hefty lawsuit under the pretense of garnering her estate—and independence—for his own purposes. Where these stories intersect is through Lena’s dubious account of her life in war-torn Poland, and her sisterhood with a childhood friend named Karolina. Lena and Karolina struggled to live through the atrocity of the Holocaust, and at the same time harbored a courageous, yet mysterious secret of maternity that has troubled Lena throughout her adult life. In telling her story to Catherine and Liam, Lena not only exposes the realities of overcoming the horrors of the Holocaust, she also comes to terms with her own connection to her dark past.

Karolina’s Twins is a tale of survival, love, and resilience in more ways than one. As Lena recounts her story, Catherine herself also recognizes the unwavering importance of family as she prepares herself for the arrival of her unborn child. Through this association and many more, both Lena and Catherine begin to cherish the dogged ties that bind not only families and children, but the entirety of mankind.

RONALD H. BALSON is a Chicago trial attorney, an educator, and writer. His practice has taken him to several international venues. He is also the author of Saving Sophie and the international bestseller Once We Were Brothers.

Praise
“Readers who crave more books like Balson’s Once We Were Brothers (2013) and Kristin Hannah’s bestselling The Nightingale (2015) will be enthralled by Karolina’s Twins.” —Booklist (starred review)

“A heartbreaking tale of a mother’s love, friendship, and family in the face of increasingly brutal conditions and the constant threat of imminent death in Nazi-occupied Poland…reminiscent of the author’s first novel Once We Were Brothers…compelling.” —Library Journal

“The third in Balson’s promising series about a husband-and-wife investigation team specializing in Holocaust cases. [Lena Woodward’s] survivor account becomes the main source of suspense, since she is reluctant to reveal the full horror of what she experienced until the end…and [it] does not disappoint.” —Kirkus

"Balson kept me on the edge of my seat wondering what the next chapter would reveal. He did an excellent job in staying true to the historical facts of those years of the Holocaust and what Lena, the main character and survivor, had to go through. Balson keeps the suspense so riveting that it was difficult to put the book down. I would say most will read it in one night sitting—kudos to Ronald Balson." —Dr. Miriam Klein Kassenoff, Director of the University of Miami Holocaust Teacher Institute

Email ThisBlogThis!Share to TwitterShare to FacebookShare to Pinterest
Labels: Ronald H. Balson, YA