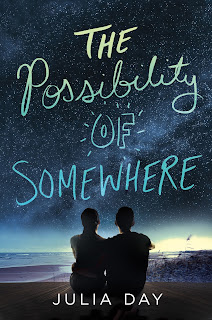 
“Eden will lure readers with her willful refusal to allow poverty and hardship to define or limit her.”
—Publishers Weekly

The Possibility of Somewhere
by Julia Day

In her contemporary YA debut, THE POSSIBILITY OF SOMEWHERE (St. Martin’s Griffin; September 6, 2016), Julia Day uses Jane Austen’s Pride and Prejudice to frame a sweet story about two overachieving high school students who want more than their small hometown has to offer. Ash and Eden are fighting their parents’ expectations, their school social status, and each other for the valedictorian spot, but when they are forced to work on a class project together –something seems to change.

Ash Gupta has a life full of possibility. His senior year is going exactly as he’s always wanted– he's admired by his peers, enjoying his classes and getting the kind of grades that his wealthy, immigrant parents expect. There's only one obstacle in Ash's path: Eden Moore—the senior most likely to become class valedictorian. How could this unpopular, sharp-tongued girl from the wrong side of the tracks stand in his way?

All Eden's ever wanted was a way out. Her perfect GPA should be enough to guarantee her a free ride to college– and an exit from her trailer-park existence for good. The last thing she needs is a bitter rivalry with Ash, who wants a prized scholarship for his own selfish reasons. Or so she thinks... When Eden ends up working with Ash on a class project, she discovers that the two have more in common than either of them could have imagined. They’re both in pursuit of a dream – one that feels within reach thanks to their new connection. But what does the future hold for two passionate souls from totally different worlds?

With a cast of characters that feel very real, from an autistic four-year-old boy Eden babysits to the new girl in school who shakes things up, THE POSSIBLITY OF SOMEWHERE is a look back into the awkward period in high school when the future is in transit. A touching back to school read about first relationships, Day’s contemporary YA debut will have you falling in love.

JULIA DAY lives in North Carolina, halfway between the beaches and the mountains. She has two twenty-something daughters and one geeky old husband. When she's not writing software or stories, Julia enjoys traveling with her family, watching dance reality shows on TV, and dreaming about which restaurant ought to get her business that night.

Hit the jump for an exclusive excerpt

y normal dress code was designed to keep me invisible, but today I made an exception. I wore a teal shirt (stolen
from my dad) over jeans that had only been owned by me. I fin- ished off with my best sneakers, freshly bleached.
After yanking my hair into a ponytail, I grabbed my back- pack, charged out of my bedroom, and screeched to a halt in the den. The trailer smelled like toast and bacon. Why?
I crossed to the table and stared down at the plate of food wait- ing there.
My stepmom came out of the kitchen, holding two mugs of coffee. She offered one to me.
I took it as my backpack slid to the floor with a thud. “You made me breakfast?”
She laughed. “I’ve done this before.”
“When I was nine, maybe.” The bacon looked like it had been fried to crispy perfection. I parked my butt on the chair and snagged a slice. “What’s the occasion?”
2    ✦       Julia Day

Her smile wobbled. “It’s the first day of your last year of high school.”
Oh, damn. She was going to get emotional on me. This day must remind her that I’d be gone in a few months. It wouldn’t be a good idea to act all happy about escaping town soon. Better change the mood fast. “Breakfast is amazing. You can repeat it whenever you want.”
“I’ll keep that in mind.” She set her mug on the table and pointed at my ponytail. “Can I do something special with your hair?”
Clearly she wanted to, so sure. “That’d be great.”
While I finished my toast, she twisted my hair into a thick French braid. It took only a couple of minutes before she pressed a kiss to the top of my head. “There you are, sweetie. Now go on, or you’ll miss the bus.”
“Okay.” I stood, gave her a quick hug, and slung my backpack over one shoulder. “Thanks, Marnie. For everything.”

The bus dropped us off fifteen minutes early, something that would never happen again. I went straight to my first-period class. AP English Lit with my favorite teacher.
“Morning, Ms. Barrie,” I said.
She didn’t look up from her computer. “Hello, Eden.”
I slipped into a desk in the back row and watched as my class- mates trickled in.
My next class would be statistics, although it had been a re- cent change. I’d realized in middle school that college was my best route out of Heron, and I wouldn’t get to college without serious scholarships. So I’d mapped out my high school curriculum in
The Possibility of Somewhere     ✦       3

seventh grade, picking each course to maximize my GPA. Every- thing had gone according to plan until three weeks ago, when I’d switched to a different math class and elective. The decision had seemed bold at the time. Now, it felt crazy.
After English, I dropped by my locker and arrived late for second period. With nervous anticipation, I smiled at my statis- tics teacher and turned toward the back.
“Wait, Eden. Sit there.” Mrs. Menzies gestured at an empty seat on the front row.
I paused, looking from the desk to her. She eyed me steadily, a challenge in her expression.
Did she expect me to argue with her? I certainly wanted to. Swallowing hard, I took my seat.
“All right, everyone. I’m glad that you’ve chosen to take Advanced Placement Statistics . . .”
I tuned out what she said, too annoyed to listen to whatever welcoming remarks she had for us. They would be on her sylla- bus anyway. I was consumed with shrugging off how much it bothered me to sit in the front with a dozen pairs of eyes behind me. Were they watching me? Probably not, but I didn’t like that it was a possibility.
Even deep breaths betrayed me, because they filled my head with the soapy-clean, spicy-cologne scent of Ash Gupta. Why did Mrs. Menzies have me sitting next to him?
“. . . you’ll have one group project and one individual assign- ment due each week . . .”
I glanced at her. Group projects already? Was that why we had assigned seats?
“. . . that’s it for now. Form into your teams. I’ll hand out your first project.”
4    ✦       Julia Day

The sounds of dragging chairs and laughing voices filled the room. I checked around. Was I the only one who didn’t know what to do?
Ash was looking at me, pained resignation on his face. “You’re with us, Eden.”
I dragged my desk into the circle beside him. There were five of us in the group. Upala and Dev were Ash’s friends. A built-in alliance. They would vote as a bloc even if I could get the last guy on my side.
The next few minutes blurred into the rhythms of a project team pretending to become cohesive. I didn’t join in, listening instead to Ash control the discussion and watching as Mrs. Men- zies went from group to group, dropping off a large bag of M&Ms, several paper bowls, and the project sheet. When she finally arrived at our circle, she described what she wanted and then gave me a hard stare.
“I want collaboration from everyone.”
Message received—although it was unnecessary. I participated when it mattered. Reaching for the M&M bag, I filled a bowl and began separating the candies by color. An exercise in probabilities. “Before we go any further,” Ash was saying, “we should pick
a leader for the team. How do we want to choose?”
“Might as well cut the bullshit, Ash,” I said without looking up. “You want the job. No one’s going to fight you. Just take it by acclamation.”
Silence greeted my speech. I glanced at him. His gaze held mine for a second before he frowned at his notebook, picked up a pen, and began drawing tiny perfect squares, one after the other. I looked at the rest of the team. Upala and Dev glared at me but didn’t disagree with my suggestion. Probably hated that it had come from me, though.
at September 04, 2016