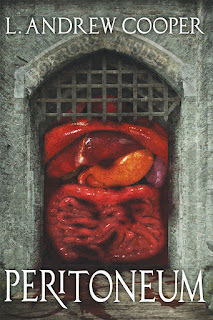 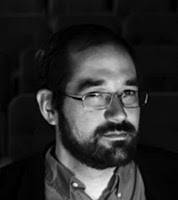 L. Andrew Cooper scribbles horror: novels Burning the Middle Ground and
Descending Lines as well as anthologies of experimental shorts Leaping at Thorns (2014 /2016) and Peritoneum (2016). He also co-edited the anthology Imagination Reimagined (2014). His book Dario Argento (2012) examines the maestro’s movies from the 70s to the present. Cooper’s other works on horror include his non-fiction study Gothic Realities (2010), a co-edited textbook, Monsters (2012), and recent essays that discuss 2012’s Cabin in the Woods
(2014) and 2010’s A Serbian Film (2015). His B.A. is from Harvard, Ph.D. from Princeton. Louisville locals might recognize him from his year-long stint as WDRB-TV’s “movie guy.” Find him at amazon.com/author/landrewcooper, facebook.com/landrewcooper, and landrewcooper.com.


Revenge of the YA Grad Students by L. Andrew Cooper

When I’m at conventions, I get asked pretty often whether my horror novels and short stories are appropriate for young readers. The easiest answer is no, but when I say the main reason is violence, parents sometimes challenge me. After all, some of them, like me, were reading Stephen King before puberty. And like Stephen King, I often write from kids’ perspectives. Some of the best point-of-view writing in my collection Leaping at Thorns appears in “Hands,” a story about a boy whose cruel friends trap him in a deep hole that’s filling up with rainwater. My favorite moment in the story “Light” from that collection is when a little girl, in the thrall of evil light, looks at her father’s head in the distance and thinks about it bursting in her mouth like a grape. In my new collection of horror stories, Peritoneum, the first and last stories, “Prologue: The Family Pet” and “The Broom Closet Where Everything Dies,” are both in kids’ perspectives. Perhaps the clearest identifier for Young Adult fiction these days is that the protagonists are themselves young adults. Does that make the stories I’ve mentioned at least a little YA?
The kids in these stories are not alright. The full extent of not-alright-ness from “Family Pet” doesn’t become apparent until later stories such as “TR4B”… but the modded shotgun should tell you right away that the “Broom Closet” kid is bad news. I might have loved such disturbing, horrific stories when I was in my mid-to-late teens, but by then I was reading adult literature with my parents’ approval. These days, “young adult” has new meaning. The Young Adult Library Services Association acknowledges that “YA” now seems to target readers ages 10 to 25 (http://www.ala.org/yalsa/guidelines/whitepapers/yalit)—that’s elementary school potentially up to grad school. I think putting my work into the hands of an elementary schooler would be downright irresponsible, but if you’re in grad school, while the violence and references to sex might be too much for you, I’ll trust your judgment. Are you a high school English teacher who likes a bizarre, disturbing tale? Read me! Are you a grade school student? Talk to your teacher. Again, I’m inclined to say my work is for adults only, but even “NC-17” falls within this new YA demographic. All the grad students reading Harry Potter and The Hunger Games might have shifted our expectations from YA.
Amidst growing confusion about YA’s meaning, I did attempt one YA story. It’s called “Bubble Girl,” and it’s in Peritoneum. The characters are all kids drawn to an eerie phenomenon on a playground—a little girl floating in a bubble. I use much simpler language than I generally do, but the story accumulates through word of mouth and speculation, so it isn’t entirely straightforward. The Bubble Girl has a horrific back story, but she begins and ends mysteriously. In terms of language, character, and overt violence and sexuality, I think “Bubble Girl” could pass for YA. I’d love to get some teacherly feedback on it, though, as my adult readers so far have spotted wicked sexual psychology and other underpinnings that would seem to disqualify it. In short, readers find the story, like my other stuff, too bewildering and unsettling for YA. If they’re right, maybe we need to start defining YA less by its target audiences and character traits and more by its structural and cognitive requirements.
(Did I mention that I taught English literature, writing, and film studies for more than ten years?)


My point about YA isn’t that I qualify strangely in the category—I really don’t—but that the category is too sloppy. We don’t want grade schoolers rushed off to grad school or vice versa. Instead of thinking about age limits and character traits, let’s focus on what readers demand from stories and stories demand from readers. I’d say my stories demand more than most YA readers are ready to give… in some cases, I really hope to take your breath away… but English teacher types—well, we tend to invest more in our reading experiences in order to get more out of them. How young people come to know their own minds will depend on the views of them we all decide to promote.
Hit the Jump for More Information about the New Releases


Book Synopsis for Peritoneum:  Snaking through history–from the early-1900s cannibal axe-murderer of “Blood and Feathers,” to the monster hunting on the 1943 Pacific front in “Year of the Wolf,” through the files of J. Edgar Hoover for an “Interview with ‘Oscar,'” and into “The Broom Closet Where Everything Dies” for a finale in the year 2050–Peritoneum winds up your guts to assault your brain. Hallucinatory experiences redefine nightmare in “Patrick’s Luck” and “The Eternal Recurrence of Suburban Abortion.” Strange visions of colors and insects spill through the basements of hospitals and houses, especially the basement that provides the title for “TR4B,” which causes visitors to suffer from “Door Poison.” Settings, characters, and details recur not only in these tales but throughout Peritoneum, connecting all its stories in oblique but organic ways. Freud, borrowing from Virgil, promised to unlock dreams not by bending higher powers but by moving infernal regions. Welcome to a vivisection. Come dream with the insides.
Book Synopsis for Leaping at Thorns: Leaping at Thorns arranges eighteen of L. Andrew Cooper’s experimental short horror stories into a triptych of themes–complicity, entrapment, and conspiracy–elements that run throughout the collection. The stories span from the emotionally-centered to the unthinkably horrific; from psychosexual grossness to absurd violence; from dark extremes to brain-and-tongue twister. These standalone stories add important details to the fictional world and grand scheme of Dr. Allen Fincher, who also lurks in the background of Cooper’s novels Burning the Middle Ground and Descending Lines.