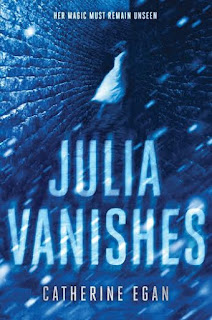 HER MAGIC MUST REMAIN UNSEEN . . .
JULIA VANISHES
★ “There is a richness to this inaugural volume of the Witch’s Child trilogy,


and readers will be hard pressed to put it down.” –Booklist, Starred

Review
I have read a lot of YA love triangles and dystopian stories lately, so I was looking for something a little different. I found that in Julia Vanishes. The plot is as mysterious as its title, and figuring out Julia's life and her purpose is equally entertaining.

Julia, 16, is a new maid in house run by Mrs. Och. Going by the name Ella, Julia hides her past as a thief and daughter of a witch. That description enough should make you want to run out on June 7 and get this book! Julia has a unique ability that she must also hide--she can disappear at will. If anyone knew of her ability, she would be accused of witchcraft. Witches in this book are drowned, accused of writing down their wishes to make them come true. Julia regularly attends the Cleansings (public drownings), perhaps because she is somehow connected to her mother's death (her mother was drowned at a previous Cleansing).


Since this is the first book (Witch's Child #1) of a trilogy, a lot of the characters are described with basic information. We don't really learn much about them, but it is to fall in love with them regardless. They are muted but vital to the story, and I'm sure they will become dynamic in the sequels. If anything, they help to create Julia's mysterious persona and push her secrecy forward in the book. Julia's employer (who originally sends her spy on Mrs. Och and her house) is a mystery himself. While Julia enjoys the errands, and she is clever enough to figure out the messages being sent and retrieved, she doesn't know her real purpose.

The only area of the book where I was a little confused is the setting. I'm not sure, and I still haven't figured it out (perhaps in the next book?), when the book is supposed to take place. Though I do love the imagination in the book (the creatures, the names, the places), I am very much a reader who visualizes every little detail when she reads. So, I needed a little more to fully envision Julia's existence. However, this is the first book of the trilogy, and I am willing to wait to find out more!

If witches, secrets, and magical abilities are areas you're interested in, you will want to read Julia Vanishes when it comes out on June 7th! Pre-order now!


About the Book
Alfred A. Knopf Books for Young Readers invites readers to meet a heroine like no other in JULIA VANISHES (on sale June 7, 2016 / $17.99 / Ages 14 up), the first book in the Witch’s Child trilogy by Catherine Egan. Filled with murder, magic, mystery, and betrayal, this captivating read will have teen readers and fantasy lovers hanging on every page as they become acquainted with Julia and the things she needs to do in order to get by—even if it leaves a mark on her conscience. Even as the line between good and evil seems to become more blurry every day. . . .

Julia lives in a city terrorized by a serial killer. A city that witnesses the drowning of anyone deemed a witch, and that has outlawed all forms of magic. With no biological family to call her own, Julia and her brother have taken up with a group of thieves who steal in order to survive. And Julia makes a great thief and spy, thanks to her unusual ability to remain unseen. Not invisible exactly, but just beyond people’s senses. In her world, it is a valuable trait to have.

Now a teenager and fully immersed in the life that has been handed to her, Julia finds herself being paid to spy in the house of Mrs. Och, a woman known to aid witches and associate with a cast of mysterious characters. It seems as if suspicious activities are happening both inside and beyond the house’s walls, too and Julia’s boss wants her to report back with every detail.


As Julia becomes more entrenched in the Och household, she realizes that the job she has been paid to do is a conflicting one. If she delivers the information required of her, she can harm some of the very people she is starting to care for. But if she doesn’t, she won’t receive her payment, and she puts herself at risk for some very unpleasant consequences. A traitor no matter how she looks at it, Julia now faces the ultimate dilemma and the results will both surprise and stun readers.

Kirkus Reviews has hailed JULIA VANISHES as “a well-realized page-turner.” Catherine Egan weaves a taut, suspenseful fantasy with a heroine both fearless and flawed. Readers will be eager to take the journey with her as she discovers the power she has, the choices she makes, and the person she is truly destined to become.

CATHERINE EGAN grew up in Vancouver, Canada. Since then, she has lived on a volcanic island in Japan (which erupted while she was there and sent her hurtling straight into the arms of her now-husband), in Tokyo, Kyoto, and Beijing, on an oil rig in the middle of Bohai Bay, then in New Jersey, and now in New Haven, Connecticut. She is currently occupied with writing books and fighting dragon armies with her warrior children. You can read more about her at catherineegan.com. Follow her on Twitter at @ByCatherineEgan.
at May 29, 2016