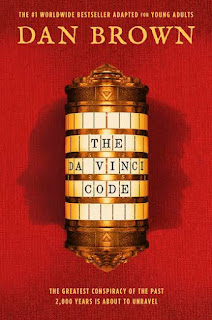 “My parents were educators, and so it’s no surprise that I have a fascination with history and research,” says Brown. “In fact, if I weren’t an author, I’m sure I would be a teacher myself. It is my sincere hope that this adaptation of The Da Vinci Code sparks in young adults the same thrill of discovery that I feel while exploring hidden history and the mysteries of the world we live in.”

Since its publication in 2003, The Da Vinci Code has become a global publishing success story, selling 82 million copies worldwide. The young adult adaptations will have new cover designs and will introduce a new generation of readers to Dan Brown’s well-known characters, among them professor and famed symbologist Robert Langdon and cryptographer Sophie Neveu. Abridged in length while maintaining Brown’s original plot that was hailed by the New York Times as “blockbuster perfection,” readers will experience the thrilling, lightning-paced journey from Paris to London that reveals the unraveling of the greatest conspiracy of the past two thousand years.

“It is incredibly exciting for us to bring The Da Vinci Code to our young adult market in the US, and to introduce young people to Dan Brown’s masterful storytelling, and his brilliant ability to bring history to life on the page,” says Marcus. “We are delighted to work with our colleagues here at Doubleday to further expand the reach of this special book, and build on its extraordinary success.”

“The Da Vinci Code is a thrilling, page-turning adventure that we know older teenagers are already reading,” says Cullen. “We’re pleased that our abridged edition is going to enable more young adults to enjoy Dan Brown’s international bestseller, which is packed with fascinating historical content and a clever code-breaking mystery.”

In the US, the Listening Library imprint of Penguin Random House will simultaneously publish an audiobook edition, available on CD and as a digital download.

This fall also brings the movie release of Inferno, in theaters nationwide on October 28, 2016 and based on Brown’s novel published by Doubleday in 2013.

DAN BROWN is the #1 New York Times bestselling author of numerous novels, including The Da Vinci Code, Inferno, The Lost Symbol, Angels & Demons, Deception Point, and Digital Fortress. He lives in New England with his wife and is a graduate of Amherst College and Phillips Exeter Academy, where he spent time as an English teacher before turning his efforts fully to writing. Visit him at danbrown.com and follow him at @AuthorDanBrown on Twitter and on Facebook at Facebook.com/DanBrown.