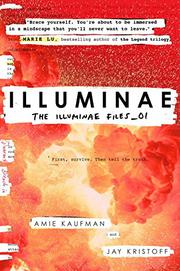 This morning, Kady thought breaking up with Ezra was the hardest thing she’d have to do.This afternoon, her planet was invaded.The year is 2575, and two rival megacorporations are at war over a planet that’s little more than an ice-covered speck at the edge of the universe. Too bad nobody thought to warn the people living on it. With enemy fire raining down on them, Kady and Ezra—who are barely even talking to each other—are forced to fight their way onto an evacuating fleet, with an enemy warship in hot pursuit.But their problems are just getting started. A deadly plague has broken out and is mutating, with terrifying results; the fleet's AI, which should be protecting them, may actually be their enemy; and nobody in charge will say what’s really going on. As Kady hacks into a tangled web of data to find the truth, it's clear only one person can help her bring it all to light: the ex-boyfriend she swore she'd never speak to again.Told through a fascinating dossier of hacked documents—including emails, schematics, military files, IMs, medical reports, interviews, and more—Illuminae is the first book in a heart-stopping, high-octane trilogy about lives interrupted, the price of truth, and the courage of everyday heroes.

ABOUT THE BOOK
An emotional contemporary YA novel about love, loss, and having the courage to chase the life you truly want.

Reeling from her mother's death, Georgia has a choice: become lost in her own pain, or enjoy life right now, while she still can. She decides to start really living for the first time and makes a list of fifteen ways to be brave - all the things she's wanted to do but never had the courage to try. As she begins doing the things she's always been afraid to do - including pursuing her secret crush, she discovers that life doesn't always go according to plan. Sometimes friendships fall apart and love breaks your heart. But once in a while, the right person shows up just when you need them most - and you learn that you're stronger and braver than you ever imagined.

ABOUT THE AUTHOR
E. Katherine Kottaras is originally from Chicago, but now she writes and teaches in the Los Angeles area. She holds an M.A. in English from the University of California, Irvine and teaches writing and literature at Pasadena City College.  She is at her happiest when she is either 1) at the playground with her husband and daughter and their wonderful community of friends, 2) breathing deeply in a full handstand, or 3) writing. She now lives in Los Angeles where she's hard at work on her next book.

Jeff Strand’s Five Favorite Zombie Movies:
My five favorite zombie movies are very similar to many other people’s five favorite zombie movies. I could’ve gone the condescending click-bait route and written about “The Five Best Zombie Movies You’ve Never Seen!” but, no, I’m going with my five real favorites….
#5: DAWN OF THE DEAD (2004 version). I was one of the many people bellowing, “You can’t remake DAWN OF THE DEAD! This is blasphemy! Blasphemy!!!” But somehow this remake to a sequel (but not a sequel to the remake) turned out to be awesome. Not quite as good as the original (SPOILER ALERT: That’s #3 on this list) but one of my all-time favorites.
#4: RE-ANIMATOR. I’ve now seen plenty of movies that are more over-the-top insane than RE-ANIMATOR, but this was the first movie where I simply couldn’t believe what I was watching. It was hard to believe that a movie so dark and gruesome could be so funny.
#3: DAWN OF THE DEAD (1978 version). Shameful confession: When I first saw this in high school I thought it was stupid and boring. Fortunately, I matured and accepted that it’s one of the high points of zombie cinema. It’s the reason I know to duck before walking toward spinning helicopter blades.
#2: RETURN OF THE LIVING DEAD. Fast zombies long before 28 DAYS LATER! The first time zombies ate brains! It doesn’t often get the credit it deserves, but this is one of the most influential zombie movies ever.
#1: SHAUN OF THE DEAD. The greatest zombie comedy ever. The greatest zombie movie ever. The greatest MOVIE ever.
Read more »
at November 04, 2015 No comments: