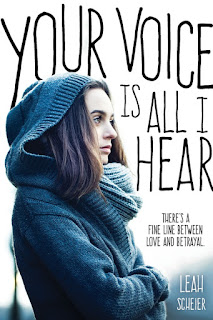 “I was the one he trusted. I was the one he loved, the only one who believed him, even when his own mother had locked him up and thrown away the key. And now, I was going to pass down the white tiled hallway, knock on his doctor’s office door, slam his secret notebook on her desk and make her read it, make her understand what he was hiding, make her see what only I had seen.”

April won't let Jonah go without a fight. He’s her boyfriend—her best friend. She’ll do anything to keep him safe. But as Jonah slips into a dark depression, trying to escape the traumatic past that haunts him, April is torn. To protect Jonah, she risks losing everything: family, friends, an opportunity to attend a prestigious music school. How much must she sacrifice? And will her voice be loud enough to drown out the dissenters—and the ones in his head?

Leah Scheier works as a pediatrician and pens stories of romance and adventure. Her first novel, Secret Letters, was published in June 2012 (Hyperion/Disney) and received a starred review from School Library Journal, as well as glowing reviews from Booklist, VOYA, and Publishers Weekly. She lives in Maryland. Learn more at leahscheier.com.

FACT OR FICTION: How much of YOUR VOICE IS ALL I HEAR is inspired by true events?

My novel is mostly fiction. Still, an author's work is often informed by personal experiences, and quite a few scenes in the book are based on events which happened to me, or people close to me. The theme, a girl whose first boyfriend is diagnosed with schizophrenia, came entirely from my imagination. Like April, I was a bit socially awkward and lonely in high school-- but no charming artist ever appeared in my life. So I tried to imagine how I would feel if a boy like Jonah had tried to get close to me. How would I have reacted? Would I have clung too close, become too dependent, fallen so head over heels in love--as April does at the beginning? Maybe. I certainly knew many girls who behaved as April did. The decisions we make as teenagers are very different from those we make when we mature.
The scenes on the psych ward are drawn from my own medical training. Little Shawn, the boy whose mother “forgets” to pick him up from the hospital, was actually a patient of mine. I changed his name and age of course, but his heartbreaking meltdown was unfortunately very real. Jonah's paranoia is also an amalgam of multiple patient interviews. One in particular stands out in my mind: I had been assigned to a young man with paranoid schizophrenia. At first I found him to be quite open and honest with me. He gave me detailed accounts of his confused beliefs and delusions. The aliens disguised as human beings, the corrupt medical personnel, the tainted food were all familiar themes to me. “But why are you telling me this?” I asked him finally. “The other psychiatrists say that you won't talk to anyone but me.”
“You're new,” he replied frankly. “They haven't gotten to you yet.”
I didn't appreciate the honesty behind his admission at that moment. But the following morning when I greeted him as usual, his expression froze over when he saw me. He stared at me, his eyes blazing with naked hostility and fear.
“Come on now, you know me,” I pleaded. “We talked for an hour yesterday!”
I don't know who or what he was seeing when he looked at me then. But he never spoke to me again. And I'll never forget how sad and helpless I felt at that moment. My readers will see echoes of that feeling in many of the hospital scenes.
On a happier note, April's audition for the Baltimore School for the Arts was drawn from my own audition to my former high school. Acceptance to the art school was a turning point in my life; it was the first place that I felt truly at home. I can't praise the school enough for everything they've done for generations of young artists. Countless talented actors, musicians, dancers and painters have had their start at the high school. My novel ends before April actually begins classes at the Baltimore School for the Arts, but I know that I've left her in good hands.