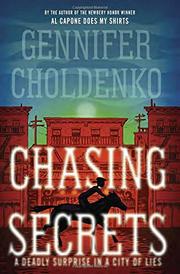 Newbery Honor–winning author Gennifer Choldenko deftly combines humor, tragedy, fascinating historical detail, and a medical mystery in this exuberant new novel.
San Francisco, 1900. The Gilded Age. A fantastic time to be alive for lots of people . . . but not thirteen-year-old Lizzie Kennedy, stuck at Miss Barstow’s snobby school for girls. Lizzie’s secret passion is science, an unsuitable subject for finishing-school girls. Lizzie lives to go on house calls with her physician father. On those visits to his patients, she discovers a hidden dark side of the city—a side that’s full of secrets, rats, and rumors of the plague.
The newspapers, her powerful uncle, and her beloved papa all deny that the plague has reached San Francisco. So why is the heart of the city under quarantine? Why are angry mobs trying to burn Chinatown to the ground? Why is Noah, the Chinese cook’s son, suddenly making Lizzie question everything she has known to be true? Ignoring the rules of race and class, Lizzie and Noah must put the pieces together in a heart-stopping race to save the people they love. Click read more for my review.

One of the my favorite aspects of the book is the struggle between being the stereotypical thirteen year old (of the time) when girls were expected to learn how to be a housewife and mother and being a scientist, which was not common or expected in the 1900s. In her spare time, Lizzie reads about anatomy, disease, and current health topics. She's not a socialite, and she's not chasing after her future husband. She doesn't resent the other girls, like Gemma, who follow in the traditional footsteps, but she doesn't feel like she belongs with them either. I loved seeing Lizzie show up another doctor or show her eagerness to help those who are afraid of her father.

There is also a duality between rich and poor, American and Chinese. Jing is a Chinaman who works as Lizzie's cook. While many of the time would view Jing simply as a worker, Lizzie sees him as family. When Jing is suddenly quarantined in Chinatown (where everyone believes the plague has originated), Lizzie stops at nothing to free him. While Jing is gone, Lizzie finds Noah, Jing's son, sleeping on the third floor of her house. Immediately she brings him food and keeps his secret to stay safely hidden until the quarantine is over. There are those unlike Lizzie who blame the Chinese for various diseases and harbor much ill will towards them. So much so that a mob comes in at midnight one night to burn Chinatown to the ground.

Even though Lizzie begins as a strong female force, her awareness of others' feelings, specifically her aunt, which she had not before considered become a big part in how she develops through the book. Her headstrong nature is definitely one to be admired by young girls. Her kindness, humility, and courage during a time when people fled in fear is impressive for a young teenage girl. While the time period of the novel is the 1900s, there have been several scares, such as Ebola, in the last few years that share similarities with the events of this novel. While the novel is fiction, Choldenko did base the details on actual events.

Sophisticated, this book will challenge young readers to think beyond what's comfortable and familiar.