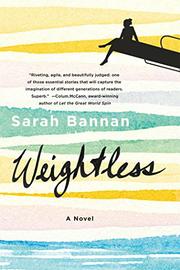 As technology becomes more prominent, more accessible, and more intrusive, our lives are broadcast 24/7. Our latest vacation, latest tragedy, or latest triumph, appear on news feeds, and within mere hours, everything we don't want posted shows up, and there's not much we can do about it. No group of people know this better than teenagers--cruel and relentless bullies or bystanders.

Carolyn Lessing just moved from hip New Jersey to small-town Adamsville, Alabama. She's gorgeous, intelligent, and sweet--just the right person to be bullied. Immediately upon arrival, our protagonists (first person plural) zone in on Carolyn's presence and observe everything about her, good and bad. Not only does she have the girls' attention, but she also has Shane Duggan's, star quarterback. Technically still with another girl, Shane quickly bounces to Carolyn's side, which doesn't help Carolyn's case for being sweet and innocent.

Carolyn becomes the center of attention: star quarterback's new girlfriend, Homecoming Queen nominee, highest math average, etc. You name it, and Carolyn holds the title. But for high school girls who have been pushed aside, there's no worse position for Carolyn to be in. Soon, the "it" girls take to Facebook (though Twitter seems to be more popular these days) and begin tearing Carolyn down, a little at a time. Our narrators are curious enough but sit idly by as Carolyn becomes thinner, quieter. They begin to notice strange marks on her arms during swim practice.

Told in chapters that take the reader from the beginning of the year to the end, we watch, we are a part of, Carolyn's breakdown. At first, I thought Bannan should have started with the ending because there are times when "if we only knew" became a too repetitive, but by the ending, I understood why we needed to see every month.

Watching as so many stood by is the most heartbreaking aspect of this debut novel. Including the first person plural narrative makes readers feel just as guilty. How many times have we wanted to say something and decided to turn away? How many times has it been too late?

The subject matter is one that is becoming too often told in the media as bullies, especially teen girls, take to the Internet to cowardly bash another girl on social media. Adults always comment how they don't really see physical bullying anymore, and it's true. Bullies now hide behind anonymous Twitter handles and Facebook profiles--some don't even hide. Yes, a victim can filter these bullies, but there's no escaping what someone thinks about you and wants to make it known to an entire school. It's up to us to save the victim like Carolyn. But like most people, we'll close the book and start another one, gradually forgetting about her.

Raw and often uncomfortable, Weightless is a necessary evil in today's technology-driven society.
at July 06, 2015