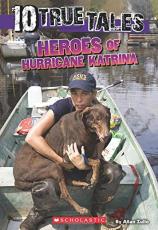 Ten true stories of real-life heroes during Hurricane Katrina!When Hurricane Katrina's flood waters rose, trapping the Bullard family inside their home, 13-year-old Phillip Bullard swam underwater to a submerged window, cleared the debris, and led each family member underwater to the roof. Then he swam to retrieve an abandoned boat and put them in it. He used broomsticks and other debris for paddles and took his family to higher ground.Terrence Gray of Gulfport, Mississippi, commandeered a rowboat that was floating nearby and dragged it from house to house to save 20 injured, disabled, and elderly people in a terribly flooded neighborhood.Nurses and doctors at Charity Hospital fought desperately to keep their patients alive for days, despite hunger, pain, heat, little drinkable water and no electricity, waiting desperately for helicopters to evacuate their patients.These and other real-life heroes risked their lives to save others during Hurricane Katrina. You will never forget their courageous true stories.

It's hard to believe that it's been ten years since Hurricane Katrina devastated New Orleans. Having visited there a few times in the last two years, it's even harder to believe. From an outsider's point of view, New Orleans is alive with culture and promise, but just ten years ago, some of the most horrific destruction to hit the United States threatened everything the Crescent city symbolized.

So a book like Zullo's is a reminder of what occurred when Katrina hit and the levees broke. Even after we saw the destruction and the rising death toll on national television, being there, going through with people did to survive, will never really mean as much to the onlookers as the survivors. While there are thousands of tales of bravery, these ten stand out because they represent people from all walks of life, all ages, and for all different reasons.

The first story is one of my favorites in the book because it doesn't just rely on courage and bravery to tell the story. Donald Colletti decided to stay behind and protect his business while he sent his family to Texas to escape the storm. While the immediate aftermath was deadly, the floods that resulted from the broken levees forced Donald out of his home. Luckily he planned to have his boat full of gas and ready in case the worst happened. Realizing his home was going to be completely underwater, Donald takes his dog and his treasured photographs and hops on his boat. Hearing his neighbor Jimmy and Jimmy's mother's cries for help, Donald immediately rescues them. Unfortunately, Jimmy's mother does not survive, as she was already in ill health, and the trauma of of the hurricane was too much. Despite her death, Donald and Jimmy spend countless hours rescuing people whose screams echoed into the night, keeping them from sleeping. Braving injury and infection, both men work tirelessly until other rescuers obtain boats. And this is only one of the ten tales.

Inside the book, you will find courage, bravery, compassion, and most importantly, the desire to do good. From a coast guard helicopter pilot to a woman in Charleston, S.C., these heroes need to be recognized, read about, and remembered. Not only did these heroes and heroines rescue people but the thousands of animals who were reluctantly left behind or tragically abandoned by their owners.

Each tale is equally mesmerizing, and for younger readers, the tales are short and to the point in near perfect storytelling. As an adult who remembers Katrina, it makes me wish I would have, or could have, done something to help, but I'm glad to know that there were so many others who did what most of couldn't do.

Zullo paints pictures that we didn't see on TV, and ones that will never be forgotten.