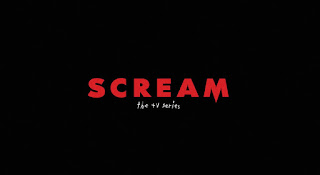 I can pretty much say that (of the people I know at least) I am one of the biggest Scream fans, so when I heard about MTV's new TV series, I was both intrigued and anxious. Anytime a horror series can be a part of television, I'm there (i.e. Hannibal), but I wasn't sure how MTV would present the show. The 2015 MTV Movie Awards premiered the trailer, and I was pretty impressed.


With Bella Thorne in the lead role (recently starring in The Duff), I was hopeful that MTV, producer Wes Craven, and writers Jill Blotevogel, Dan Dworkin and Dan Beattie would bring it!
The premiere on June 30, 2015 was everything I wanted to be.

As the famous franchise is known to do, the pilot begins in modern day with a cyberbullying incident filmed and/or posted by Nina Patterson (Bella Thorne). Arriving at her home, Nina changes into her bathing suit. Her boyfriend Tyler has just left, and it's time for a late night swim. But in true Scream fashion, she's not alone. Not only is someone watching her on her laptop's web cam, someone (whom she thinks is Tyler) is texting her.
True to form, Nina (a little too much like Drew Barrymore in the film's first installment) meets her untimely demise after seeing Tyler's severed head land in the hot tub. Running, like any girl in a horror movie, straight into the killer's hands, Nina kicks off the killing spree to come. And this isn't the first time the town of Lakewood has dealt with a killer. Twenty years earlier, Brandon James (who suffered from a facial deformity) fell in love with a girl he called Daisy. After attacking her boyfriend and meeting "Daisy" at the lake, Brandon is tricked and shot by the police. Is the mysterious killer an undead Brandon James or someone in Nina's circle?

I'm still not sure how I feel about the new Ghostface mask. Since the series doesn't follow
the movies, it's not that big of a deal. The new mask is supposed to mimic James's face, so it's probably too obvious that he would be the killer.

So let's take a look at the top five cast of characters and ponder who may be the suspect.


Willa Fitzgerald (Emma): The new "Sidney." Emma is the sweetheart of the group. Even though she was a part of the cyberbullying filming, she quickly repents and tries to do right. Her mother is "Daisy," though Emma doesn't know this in the pilot, and her father left years ago. She could definitely be a suspect; after all, Emma Roberts was one of the killers in Scream 4.

Bex Taylor-Klaus (Audrey): One of the girls who was filmed making out with her friend Rachael. Audrey loves filming, which I'm sure we'll come in handy (you know, a movie within a movie). Audrey is an unlikely suspect. She really has nothing to gain from it. Perhaps she' s mad about the video, but she doesn't seem the type to let others bother her enough to murder.


John Karna (Noah): The new "Randy," Noah is obsessed with the Brandon James case and anything that screams horror/serial killer. Audrey's friend, Noah is often bullied by the jocks. But, just like Randy, Noah is probably at the bottom of my suspect list. He's just that cool dorky guy that pulls at the heart strings of the girl next door and the movie fans.

Carlson Young (Brooke): The "it" girl who deep down is glad that Nina is dead. Brooke is having an affair with her young teacher Mr. Branson. Definitely the most annoying, heartless character, Brooke may not be smart enough to be the killer.

Kieran is quiet, handsome, and intelligent. He is attracted to Audrey, whose cheating boyfriend is definitely a suspect. Kieran will remind you of Skeet Ulrich's Billy which puts him at the top of the suspect list.

After the shocking death of Bella Thorne's character (really, you didn't see that coming?) in the pilot, the killer sets his sights on Rachael, Audrey's friend from the video. She's had a hard time dealing with the aftermath of the most, so the killer, who kills her by tying a noose around her neck and throwing her off of the porch) makes Rachael's murder look like a suicide in her bedroom. Feeling terribly, Emma tries to make amends with Audrey since they used to be really close.

This is the first time the killer has made a death look like a suicide, so it's interesting that the killer would hide behind this; however, Emma's mom is a pathologist so she's bound to find out her death wasn't a suicide. Could the killer be setting her up? She does receive a box with a heart in it. The new Gail Weathers shows up in this episode. Piper (who looks like she could be a high school student) runs a podcast and is there to investigate.

Because secrets can't be kept for too long, Emma finds out about her mother's past, and annoying gets mad at her. Why would her mom not want to move on and protect her daughter? Continuing from the previous episode, the killer is harassing Emma through direct messages and phone calls. Finally deciding to tell everyone, they admit they've received messages from Tyler wanting to talk about what happened to Nina. While everyone else wants to go to the police, Riley (Emma and Brooke's friend) wants to protect Tyler. When things don't go as planned and Brooke and Riley end up separated and alone, the killer makes Emma choose: "the good girl or the bad girl." Thinking she can make it back to Riley, she instructs the killer to not hurt Brooke. Riley, getting a message from Tyler, heads out back and meets her doom. But not before Facetiming Noah and gaggingly telling him that the last thing she sees is "their stars."

We're not any closer at this point to figuring out who the killer is, but at least we're eliminating a few choices. I'm a little confused by Jake and Will's (Will is Emma's cheating boyfriend) jaunts to the woods to look for money. While I know it has something to do with cash and their connection to Nina, it still hasn't been fully explained, or not explained well enough. I did feel bad for Riley; she gallantly climbed to the roof after being stabbed twice and slashed on the leg.

While I still wish we had our own Kirby Reed, the Scream series is two thumbs up so far.
at July 21, 2015