About a Girl by Sarah McCarry 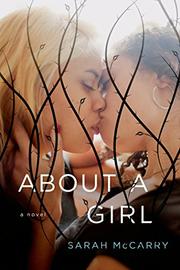 Rounding out her Metamorphoses cycle, Sarah McCarry completes the trilogy with Aurora's teenage daughter Tally. On the verge of turning eighteen, Tally is finally starting to be comfortable with who she is and who she wants to be. Set on being a scientist, specifically studying dark energy, Tally's only other decision to make is will she take the next step with Shane and possibly jeopardize their friendship.

After deciding to take the next step one night with Shane, Shane misses Tally's birthday for the first time in ten years. After she visits her mysterious neighbor Mr. M., she sees a photo of her mother (who left her as a newborn with her best friend) with a musician named Jack. Deciding to throw caution to the wind, Tally decides to go on her own quest in search of a mother and father she never knew.

Let's start with the negatives, which are few and far between, so that I can move on to the wealth of positives. Teaching teenagers on a daily basis, I know that not many would be able to handle the three large chunks of separation. In fact, I prefer chapters as much as they do because it gives me short goals when life steps in the way. With the large middle section, I couldn't decide where to stop appropriately, and I would have to back and reread a few pages.

The second negative is also a positive and really my own problem. Having not read the previous two books, I didn't know quite what to expect as far as the mythological elements, so I was quite surprised when the small town that Tally runs to is more mysterious and dark, even mythological.

This was also the best part of the book. I was so enthralled by the myths and magic that followed Tally in her quest that I completely forgot I was reading a YA novel.

Forgetting is a major plot point for the middle section as well. Once Tally starts up a relationship with Maddy, whom she meets in a bar, she begins to forget things: to talk to Jack, to call home, etc. Maddy literally makes Tally focus on other things. Forgetting about Shane on a daily basis, Tally's relationship with Maddy is the most interesting part of the book as Maddy definitely has some secrets.

With Shakespearean quotes and nods to classical mythology, McCarry's seemingly stereotypical love story took a turn for the absolutely captivating with the sophisticated language and the intricacy of the plot. I fell in love with the small west coast town and desperately wanted to stay there for the rest of the book.

Hauntingly beautiful, McCarry sets a high standard for YA.