Hello, I Love You by Katie M. Stout 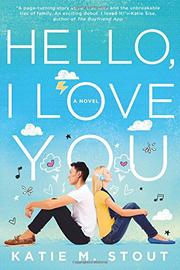 
Grace Wilde knows what it's like to be famous. He father is a famous country music producer, and her brother was at the top of the country music charts for years. Her life is a constant frenzy of photographers, interviews, and adrenaline. This excitement is also the reason why she couldn't save her brother, at least in her mind. Grace found her brother in his own vomit, and since then, she blames herself for not recognizing signs that he was depressed. Her mother also seems to blame her, so there's nothing left for Grace to do but get away.


Grace leaves Nashville, Tennessee for a completely different life in Korea, simply because it was the first country that came up in her Google search of international boarding schools. Leaving everything familiar, and painful, to her behind, Grace arrives at the Korean School for Foreign Studies. Completely unfamiliar with the culture and the language, Grace makes her way to her dorm room where she meets Sophie, a meek Korean girl who has actually lived in America and can speak perfect English, which is good to spoiled, Caucasian, blonde Grace.


Sophie quickly recognizes Grace's anxiety and takes her under her wing. Explaining how things work at the school, Sophie takes Grace to get some food, and it is here that that Grace meets Sophie's twin brother Jason, who is a hugely famous KPOP singer. Not wanting to be a part of music, Grace shuns Jason and everything he represents.


Eventually learning her way around school, Grace becomes slightly more accustomed to the Korean lifestyle. She makes several remarks about how Asian schools are more advanced with language acquisition that American schools, especially as she struggles in her Korean language class. Jason, who is in the class because he has trouble reading the language, isn't much of a help as he returns her cold exterior. But like any romantic, foreign escapade, Grace finds herself irresistibly drawn to Jason despite his fame and mixed signals.


Stout delivers a tense romance that leads all the way to the ending, where there's a bit of twist regarding Sophie's brother. While there are some inaccuracies regarding the Korean culture, Stout's prose is smooth and caters to a young YA audience with its typical girl-whose-stomach-constantly-flutters-around-the-hot-guy and hot-guy-who-sees-the-girl-as-the-distraction. The tug and pull of being or not being in a relationship is enough to cause a page-turner.


Even more important than Grace and Jason's interactions is Grace's struggle with the responsibility of her brother's overdose and the subsequent knee-jerk reaction from her mother. Grace's anxiety is genuine, and her sister Jane's insistence that what happened isn't Grace's fault, is compassionate. Those moments when Grace receives texts from Jane break up the monotony of the would-be, could-be romance. By the end of the book, Grace's realizations about her own identity are more important than the romance aspect of the book.


Historians and culture-lovers will struggle with the Korean inaccuracies, but YA readers who just want a good, foreign romance will appreciate Grace's struggle to find herself, and it doesn't hurt to see two teens fall hopelessly in love with each other.


With its own soundtrack, Stout's Hello, I Love You is an honest look at what happens when fame overcomes identity and finding one's place in the world is riddled with distrust, family, friendship, and most of all, love.
at June 24, 2015