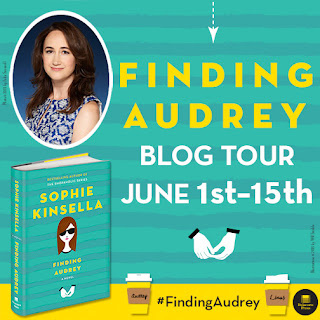 It's not often I read a book in one sitting, but I could not put this book down. It did help that I'm on a two-day train trip and have a ton of time to read since there's absolutely nothing to look at in Texas once you get past Houston. Either way, Finding Audrey is one of the most unique and witty books I've read in a long time. I can totally see it as a film adaptation and be as popular as The Fault in Our Stars.

Fourteen-year-old Audrey is no longer in school, the bullied victim of a group of mean girls. Kinsella skirts around detailing the actual incident (and in various humorous ways), but it is so effective that the scene is unnecessary. Since the incident that took Audrey out of her school, she has been seeing Dr. Sarah and taking medication to deal with her anxiety and depression disorders. She doesn't feel like she's good enough for anything, and she wears dark sunglasses at all times because she fears eye contact.

Audrey's parents are perhaps as important to the story as Audrey herself. Her father is very carefree and cool while her mom is borderline obsessive over the smallest detail. Audrey's mom reads the Daily Mail every morning and bases her quibbles for the day on the advice that ineptly pours forth from the columns. Audrey has two siblings, a younger brother named Felix, whose innocence is the only thing that holds Audrey together at times, and an older brother named Frank who is obsessed with playing Land of Conquerors at all hours of the day.

Between dealing with Audrey's anxiety issues and Frank's game addiction, Audrey's mom has lost a lot of her own individual identity. While once she had a successful career, she now stays home to take care of Audrey, which gives her a lot of time to find things to complain about. Her character is at first annoying as she seems out of touch with reality when it comes to today's teenager, but she quickly grows on you, and you can see how much she struggles with being a caring mother.

Audrey's metamorphosis into returning to a normal life begins when Frank's friend Linus begins to visit the house in order to prepare for a LOC competition. At first communicating through "pocket notes," Audrey gradually begins to see Linus as someone who can help her heal and move past the incident that has caused her so much pain.

There were so many times when I caught myself laughing out loud while reading, and that's refreshing because typical YA books that deal with this same topic tend to be very serious. Yes, the topic is serious, but sometimes finding a way out of the darkness involves some laughter. The characters are so relatable and genuine that I could easily see this on the Big Screen; it's that good. I don't do a rating system, but if I did, I would definitely give this five stars out of five.

Make sure you find Aubrey on the bookshelves immediately!
at June 09, 2015