The Glass Arrow by Kristen Simmons 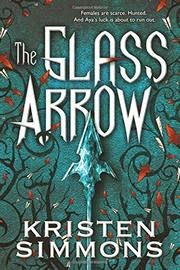 The premise of this book, girls who are sold for breeding, reminded me a lot of The Handmaid's Tale, which I was fortunate enough to read in high school. Unfortunately, I kept thinking of the book while I was reading this one. Not that the plot is the same per say, but the general idea hearkened to my high school classroom. I also just finished watching Mad Max Beyond Thunderdome a few minutes ago, so wild children were also on my mind.


Aya (which is a cool name) is lucky. She's living wild and free away from a city where girls and bought and sold for their virginity. Aya is attacked, however, and brought to the city where she must be sold. There, city girls, while valuable, won't bring nearly as much money and desire as Aya, whose untouched body has been all her own. Once I read that the city girls only survive through pills, much like vitamins, I once again travelled back to tenth grade and was reminded of Brave New World and soma.

Still in captivity, Aya has to find a way to stop her purchase. Befriending someone of the supposed lower class, Aya catches the attention of the mayor's son.

Though the plot suggests sexuality, or the lack thereof, there is nothing inappropriate here. Aya's fight for survival and for her own female identity is powerful and a good lesson to young women. While the plot meanders around the aforementioned subjects, the overall result is good enough for at least one read through.

I only read The Handmaid's Tale and Brave New World once, and I'm still thinking about them thirteen years later. While I don't think this book will end up in the canon, it would make a great YA pairing.
at May 09, 2015