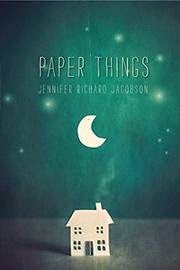 Homelessness is a topic often ignored by many in society, especially that of children and teens. Perhaps it is because we believe if we ignore it, it doesn't exist. Just today, I read a news report where two missing South Carolina teens were found panhandling in California. Whether fiction or non-fiction, anyone who sheds a light on the subject is obviously thinking in the right direction by bringing an awareness to a topic that needs to be discussed so solutions can be found.

Ari and her nineteen year old brother Gage lost their mother four months prior to the beginning of the novel. Her mother left instructions that Ari and Gage should not separate and that Janna, her longtime friend, should become their guardian. Gage is stubborn and hotheaded, and he's also an adult, so living under Janna's roof isn't working out. Knowing that her mother's wish was to stay together, Ari knows that she must leave with Gage when he decides to move out. This decision puts Ari on a path that will change her life forever. Two roads diverged...One wish that Ari's mother also was for Ari to attend Carter which is a middle school for gifted students, but moving around so much makes it difficult for Ari to focus on school work. When Gage said that he had a place to live with they moved out, he obviously didn't mean a permanent place. Ari and Gage crash friends' houses, shelters, anywhere they can survive the night.

Just like an innocent child, Ari carries "paper things" with her, cutouts from magazines of the "perfect" family. Relying on others to help them, and Gage to grow up mentally and financially, Ari has to juggle everything that should never worry a child. Her first person narration is heartbreaking, though necessary, and truthfully shows what a child thinks about whose sense of self and place in the world is shattered, or at least temporarily displaced.

Jacobson's characters are ones you could easily meet on the street and never know anything was amiss. They sit in my classroom and smile at me every day. While I see the clues of homelessness in many of my high school students, Ari isn't as lucky with the adults in her life. Such is the case for so many young people today.

Kudos to Jacobson for writing such an emotional, yet genuine, story for a, not necessarily taboo subject, but one that many do not consider unless they are faced with it personally. If anything, Jacobson wants readers to take that extra moment to look around at friends, neighbors, classmates and reach out a helping hand. You never know what someone is going through.

Juxtaposing grief and redemption, Paper Things is one of the few books of 2015 that speaks of modern society and the ignored children who inhabit it.
at May 13, 2015