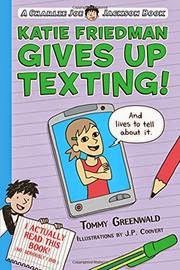 No matter what our age, we all need a reminder to put down our electronic devices and just enjoy some honest, face-to-face communication. It seems that we are on our devices 24 hours a day. In school, it's a constant struggle with my high school students to gain their attention long enough to teach a lesson, and as soon as I'm done, they've picked up their phones. Even as an adult, I can say that I'm on my phone way too much, and after reading this book, I'm working on cutting back.

Katie Friedman is in middle school, and that comes with a lot of awkward territory. Her best friend is Charlie Joe Jackson (and you may have read Greenwald's other books featuring Charlie Joe), and her boyfriend is Nareem, the sweetest guy you could ever meet. But there's a problem: Katie really isn't "into" Nareem anymore. Finally deciding to break up with him, Nareem quickly interrupts and tells her that he has backstage passes to the upcoming Plain Jane concert, which happens to be Katie's favorite band. Deciding to hold off until after the concert, Katie puts the breakup on hold.

Katie meets the lead singer, Jane, and becomes even more enthralled with the idea of becoming a musician. Jane instructs the audience to put down the cell phones and just learn how to communicate to each other. Later, Katie is texting Charlie and Nareem at the same time and accidentally texts Nareem that she really doesn't like him anymore. Realizing what she's done, Katie vows to stop using her phone and computer for a week. Making a deal with Jane, Katie needs to get ten other students to do this as well, and this experiment starts a war between the "Phonies" and the "Cavemen."

We can probably all say that we've mistakenly sent a text or at least said something negative about someone else through text, and Katie's message really hits home with me as an adult. I read this book in about two hours, but not because it's an easy read. I really enjoyed the fast-paced plot and seeing what the outcome of Katie's ordeal would be.

In Breakfast Club style, Greenwald brings together a group of students that wouldn't normally talk to each other. Illustrating what can happen when kids aren't so absorbed with the next popular app or funny video, Greenwald sends a message to technology users of all ages. Put down the phone, maybe not for a week, but for a dinner, for a conversation, for a day. I enjoyed Coovert's illustrations as well and thought they were appropriate for the age group.

We've all had that Katie moment where we smack our head with hand and say "oops," but learning how to correct that mistake is what is important here. Even if you hurt someone, building trust and forgiveness is what will move a friendship forward. What a message for tweens, teens, and adults.
at May 25, 2015