All the Rage by Courtney Summers 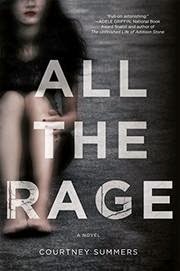 It's never easy being a girl. Awkward adolescent moments that give way to even more awkward moments at home, being a girl is an endless cycle of gossip, drama, and bullying. Romy Grey knows what it's like to be all of the above. Raped at a party, Romy has lost everything because no one believes a policeman's son could be guilty. In the midst of questioning herself, Romy's every day life is a mix of hate, cruel stares, and distrust.

The only way Romy can find any peace of mind is working at a local diner. Far enough away from everyone who hates her, Romy finds solace in the hustle and bustle of diner life. Plus it doesn't hurt that a cute guy named Leon has taken a special interest in her. Of course, trying to trust another guy isn't easy, and Romy struggles with this relationship for the entire book.
The first half of the book moves a little slowly. Establishing Romy's current situation is definitely important, but the significance of what it all means for Romy and her ex-friend Penny Young doesn't come to play until the second half of the book.

Penny and Romy were best friends until Romy's admission rocked the school. Penny left her behind to stay with the popular crowd who continues to torment Romy on a daily basis. So when Penny randomly shows up at the diner to tell Romy she does in fact believe her after another girl made similar claims, Romy's sense of self vanishes. Blindly walking out of the diner after Penny, Romy wakes up the next morning on the side of the road with her bra undone and the words "rape me" written in lipstick on her chest. Later, she finds out that Penny is missing, and so begins the exhilarating plot twists that surge the plot forward.

Not hiding behind the taboo nature of discussing rape, Summers dives head first into plot that only gets better as it develops. With unwavering honesty and realistic glimpses into the girls' locker room, this author is one to keep your eye on. So often, we read books that deal with the same subject matter, but they tend to gloss over the details. Summers presents the raw prose that matches the intensity and brutality of relentless bullying.