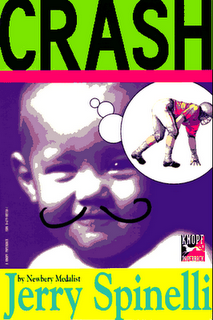 I have taught Spinelli's Stargirl for the past few years, so I'm already a big fan. His straightforward charisma with his characters and plot has been a refreshing look into the lives of young people and the issues that plague them. While Crash first appeared in 1996, I didn't come across the book until this year, and I'm so glad I did. Here is a book that explores the life of a successful football player and the ins and outs of acting like one towards those who are not athletically talented.

Crash Coogan is a very talented football player, and he has the jock attitude to match. As a young boy, he meets his new neighbor Penn Webb, and while the two seem to get a long for awhile, Penn and his Quaker parents are just too different for Crash's scene. After years of declining Penn's requests for dinners and friendships, Penn finally gives up and leaves Crash alone. Not long after, Mike Deluca, a football player, moves into neighborhood and quickly befriends Crash. To them, playing practical jokes on Penn is enough entertainment to make it through the school day.

Crash's little sister is also growing up and deciding what values are important to her, including stopping the mall that is going to be built with the help of her real estate mother and building a wildlife habitat in the backyard. Crash realizes that a lot of this new influence on his sister is coming from Penn, the "peace" badge wearing nerd from next door. While Penn and Abby seem to have it all figured out, Crash soon realizes he doesn't, and finding out what's important to him becomes the central focus of the novel.

I read the book in one sitting, for the simple reason that I had to know the outcome. The fast paced, page turning chapters are simply delightful. Crash's first person narration over the course of time portray his coming of age mentality and genuine feelings of being an athlete and a true friend. Even when he pulls pranks on Penn, Crash's internal struggle is apparent.

Perhaps my favorite character, Abby brings a unique voice to the book. A young activist and animal lover, the interactions with her mother over discussions of gender equality are hilarious and endearing. Being the polar opposite of her brother lightens Crash's man vs. self crises and presents a quality to the book that would otherwise be missing with only a male protagonist.

The story itself reminds me a lot of Stargirl in the fact that main character is searching for a true identity. Isn't that what growing up is all about? It's really hard to find an author who so closely identifies with being young and confused, yet I see that connection with every Spinelli novel.

Like me, you may have missed this one in the 90s, but rest assured the plot and principles are still relevant today. Definitely pick this one up soon!