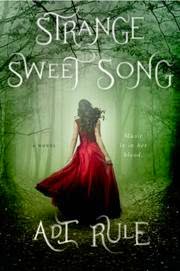 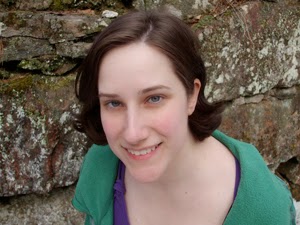 "I write in a studio apartment filled with books, cats, pictures of cats, musical instruments, video games, records, and a macaw who refuses to say, "Shiver me timbers!" despite the fact that it would be the best thing ever. When I'm not writing, I may be found playing Triple Yahtzee with my grandmother or singing in the chorus of the Boston Symphony Orchestra/Boston Pops, with whom I have also been a soloist.
I earned my MFA in writing from the Vermont College of Fine Arts, and I also have a BA in voice from the University of New Hampshire. I am represented by Ammi-Joan Paquette of the Erin Murphy Literary Agency." Check out her website here.
Review:
In this debut YA novel, Adi Rule brings us drama in its most complicated form: paranormal romance. Sing da Navelli is the daughter of two very prominent and legendary musicians. Her mother, Barbara, tragically died onstage during a performance of Angelique, and her father is a benefactor of Dunhammond Conservatory, the boarding school where Sing has just become a student.
As if being at a boarding school didn't provide enough teen drama, the forest surrounding the school comes with its own turmoil. Purportedly hosting the Felix, a large cat that will either kill you or grant you a wish, Dunhammond is more than just a place for music.
Upon arrival, Sing is clearly the center of attention, and this isn't necessarily something that she wants, at least not from the snobs. Being Barbara's daughter doesn't even come with its own perks; Sing has to work twice as hard to prove her talent.

Competing against Lori Pinkerton, the perfect blond, for the lead role in Angelique as well as straight to the heart of Ryan, the rehearsal pianist, Sing has a hard road ahead of her. Eerily drawn to the forest, Sing must try to find her place at Dunhammond, all the while trying to keep up with the mysteriously rude Nathan Daysmoor, an apprentice and Sing's apparent enemy.
As someone who is not musically inclined, I had a hard time keeping up with this one. Not that it's overtly complicated, but I wasn't personally interested. That being said, I would definitely pass this along to some of my students in chorus. Deciphering the setting was quite difficult; I found myself flipping back and forth wondering where in the world I was.
The forest and the Felix reminded me of Alice in Wonderland, in a good way, but the chapters dedicated to the Felix, though thankfully short, discombobulated the flow of the plot. I would almost rather read an entire book about the Felix with Sing's story as the subplot. Also, chapters dedicated to Nathan and George were confusing, and I gave up early trying to figure out everyone's place at the school. Sing's crush on Ryan and Lori's attempts to control him are typical in YA lit, so nothing new there. Once I realized that Daysmoor wasn't a creepy old man (because that's how I read him for the first fifty or so pages), I knew what the ending of the book would be.
Again, I'm writing this review from the point of view of someone who doesn't read a lot about musical interests, notes, tones, etc. For a teen girl who sings or plays an instrument and enjoys good boarding school drama, this book is perfect. Definitely a very specific audience for this one.