Outcast by Kirkman and Azaceta 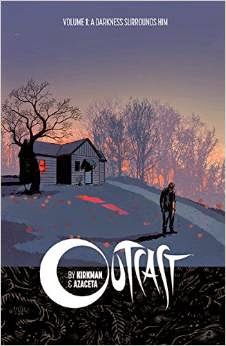 Robert Kirkman shows he's not only a genius when it comes to zombies. Entering the paranormal world of demons and exorcisms, Kirkman explores faith in a way The Walking Dead only tiptoes around. Complete with characters who struggle with faith vs. reality, with finding one's place in the world, or remaining an outcast.

The comic opens on a farm with a barn (familiar, yes). Inside the typical, white, two-story house, Joshua is having a snack while his sister and mother argue over his sister's boyfriend. Realizing that Joshua isn't munching on chips, Betsy, the mother, investigates only to find that her son has chewed off his own finger. At first, I thought zombies...again, but the next scene takes us to Reverend Anderson who is discussing faith and loss with the police chief. From there, we meet our protagonist, Kyle, who knows all about possessions. Having witnessed his mother's possession as well as his wife's, Kyle has lost everyone to the darkness.

Invited by Reverend Anderson to assist with Joshua, Kyle is forced to remember his past, but he's not quite ready to confront it at first. Realizing the darkness will never cease to pursue him, Kyle decides it's time to find out why.

Already signed to be a series on Cinemax, Kirkman will once again control the TV horror genre, and maybe for the better as The Walking Dead's ratings have dropped slightly. Still a fan of TWD (but hoping for something new in the series, and no, I don't trust this new community), Kirman may revitalize the 60 minute horror slot with something we all actually fear: faith, or the lack thereof.
at February 10, 2015