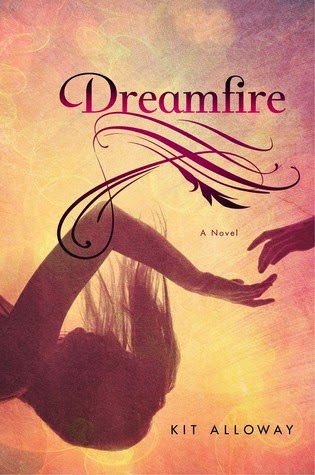 (from Macmillan's website)KIT ALLOWAY writes primarily for young adults, having always had an affection for teenagers.  In addition to writing, she plays various musical instruments, decorates cakes, mixes essential oils, and studies East European languages.  She lives in Louisville, KY with her family and four very tiny dogs. Dreamfire is her debut novel.

When I first read the premise of this book, I was a little worried. Since I'm a huge horror movie fan, I thought the plot sounded a lot like that of Nightmare on Elm Street 3: Dream Warriors. Knowing that this would probably not be the case, I let go of the connection (probably only visible in my mind anyway) and dived right in. Boy was I glad I did. Alloway's debut YA novel is nothing short of harrowing, romantic, and enthralling.

Joshlyn (such a cool, non-gender specific name by the way) is the daughter of dream walkers, and she has a very important task: enter others' nightmares and solve them. The problem is, if she can't, elements of the Dream world will enter the real world and cause consequences Josh cannot afford. Not only that but a dream walker can lose his/her life by entering someone's dream. Josh knows this all too well as she suffered the loss of her boyfriend.

When she turns 17, Josh is assigned an apprentice, Will, to battle the dreams together and learn from each other. Still feeling responsible for her boyfriend's death, Josh doesn't want the burden of keeping Will safe, much less alive. But like every good YA novel, Josh quickly realizes that there's more to Will than she first thought, and fighting to save both their lives when strange men appear in the Dream world becomes Josh's number one priority.

Like Freddy's nightmares, because I just can't seem to let that go and without it the movies wouldn't be the same, Alloway's dream world must exist for the novel to be successful. In the Dream world is where she crafts her most stimulating scenes, and here is where she shines as a writer. Her characterizations are nothing short of intoxicating, and there is just the right amount of balance between romance and self-awareness on Josh's part. She isn't 100% dependent on Will's companionship, but the genuine romance is enough motivation for her to push through her regrets and mistakes.

Set in a dual world we haven't seen in YA, Dreamfire is a paranormal adrenaline rush.