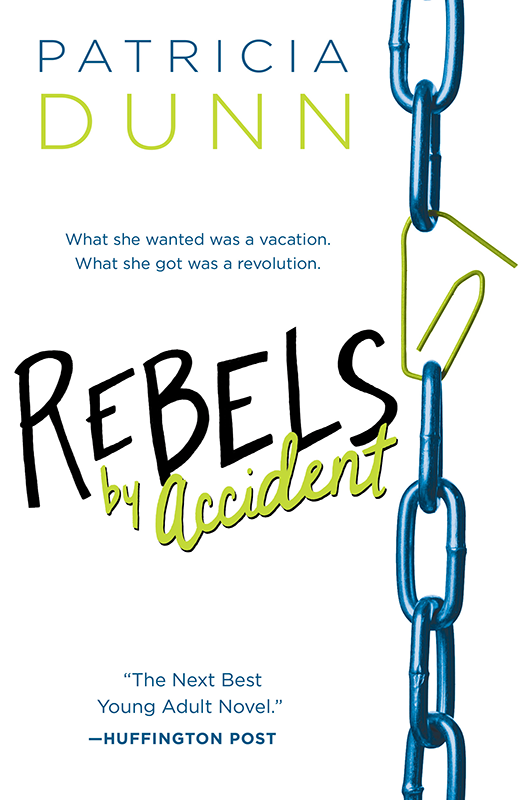 Patricia Dunn’s writing has appeared in Salon.com, Christian Science Monitor, Village Voice, The Nation, LA Weekly, and others.
With an MFA in creative writing from Sarah Lawrence College, where she also teaches, the Bronx- raised rebel and former resident of Cairo is now settled in Connecticut, with her husband, teenage son, and toddler dog. Visit her website here.
Review:
Journalist Patricia Dunn boldly steps her foot in the YA waters with her debut novel, Rebels by Accident. Fifteen year old Mariam is an Egyptian American living in a post-9/11 world where it's already tough to be a teenager, much less one who physically resembles what many stereotypically consider a terrorist.
Not only is it difficult dealing with the sideways glances of people she sees on the street, Mariam must also face the "mean girls" of her school, those who constantly ridicule Mariam for her looks.


At the opening of the novel, Mariam and her best friend Deanna are in jail, busted at a party with underage drinking and illegal drugs. There she quickly becomes the target of other girls' stares and the verbal abuse of those who believe they are superior. Unable to stand up for herself, Deanna (who has a facial deformity herself) becomes Mariam's voice and quickly silences the bullies.
Picked up her parents, Mariam's mother and father don't know how to handle Mariam's new found, rebellious friendship with Deanna and decide to send Mariam to Egypt to stay with her grandmother (sittu). At first, Mariam's anger at being sent away is unbearable as she fears living with someone her father has described as overbearingly strict. In a turn of events, however, Mariam's parents tell her that Deanna will accompany Mariam on this trip, thus causing Mariam to calm down considerably.
Upon arrival in Egypt, and only staying with her sittu for five days, Mariam realizes that her grandmother isn't the cold-hearted woman she believed her be; in fact, both Mariam and Deanna mature over the short period of time by learning about Egyptian culture, entertainment, and the current revolution that causes their stay to be shortened.
Dunn's skillful journalistic style blends well with the fictional elements, bringing a voice to those teenage girls who spend each day in fear due to a physical or genetic difference. Not many American teenage readers have the opportunity to see the current state of affairs in other countries, and Dunn's realistic characterizations of Mariam and Deanna and their bond swiftly push the plot forward.

The adventures with Mariam's grandmother and the budding love interests are practical, although it is a little too convenient that Mariam's parents allow Deanna to journey to Egypt with Deanna. The point of sending Mariam overseas should be to separate the two and teach Mariam some cultural identity and self-respect; however, the book wouldn't have the same power without Deanna's confidence and willpower.
Dunn's entrance into the world of Young Adult fiction touches on many different aspects of being a teenage girl, and Mariam's maturation in the novel is a refreshing change of pace from the action-packed heroines in today's bestsellers. A hero doesn't have to live in a sci-fi world; she can be the girl the next door or the girl from Egypt.

Rebels By Accident Excerpt
Sixteen (well, almost sixteen), and I’m behind bars. Okay, maybe I’m being a bit dramatic. It’s not as if I’m locked up with serial killers or slashers, but I’m in a cell. Deanna’s with me, along with about thirty other underage girls who were also at the party and didn’t run away in time or convince the police to let them go.

As we piled into squad cars, I watched these girls (and even a few guys) put on all the moves—-crying, flirting, screaming, fainting, even begging—-to get out of the arrest, but none of it worked.

I have to say Deanna gave it her best. Not being able to crack a smile really worked to her advantage when the officer in charge said to her that he was glad someone was taking the situation seriously. She wasn’t kidding when she said she was a great litigator like her mom.
When the cop found me hiding in the bathtub with the shower curtain drawn (could I have picked a more obvious place?) and dragged me downstairs with the rest of the crowd, there was Deanna, telling the police we shouldn’t be responsible for the actions of some stupid guys who brought beer to the party. She almost had one cop convinced to let us go when Karen, the bane of my existence, stepped forward and threw up on his shoes.

All through elementary school and middle school, Karen and her drone Beth talked trash about me and my family. Their favorite insults were that my dad was in Al--Qaeda and my mom was only one of his many wives.

At least she’s not in our cell. They put her, and all the other vomiting kids, in a separate cell—-with buckets.

Still, it stinks in here. I stick my nose between the bars, trying to breathe air that doesn’t smell like puke, beer, or raw fish. Who has an open sushi bar at a high school party? Then again, what would I know about parties? This is the only party I’ve been to since first grade.

“Come on, Mar. It’s not that bad.” Deanna pushes against my shoulder. I don’t budge. I don’t say anything.

“Funny how we started the night trying to break into the party, and now we just want to get out.” Deanna stands closer to me, but I can’t even look at her. If I do, I’ll start to cry. And I’m already the biggest freak at school.

“Look, I know you’re flipping out here, but everything will be okay.”

“Are you kidding me?” I turn to her and lower my voice. “I’m in jail. Do you know how happy this is going to make my parents?”

“Now they can feel totally justified when they never let me leave our apartment again.”

Relax? We’ve just been arrested! We are in a holding cell with girls who have picked on me—-or, worse yet, ignored me—-since kindergarten. On top of that, my parents are going to kill me! Why did I let Deanna talk me into going to this party?

Okay, the truth: she didn’t have to talk me into anything. I wanted to go. I would’ve done anything, even lie to my parents, to crash a party. I knew I wasn’t invited and that I’d probably be kicked out as soon as someone saw me. But forcibly removed—-by the police? That I didn’t expect.

Still, I shouldn’t blame Deanna for helping me get what I wanted. But I do. It was an amazing night of music and dancing. Yes, I danced with three guys! And nobody made jokes about my dad being a towel--head or my uncle being Bin Laden…Tonight I was dancing and laughing. I wasn’t a freak or a weirdo; I was just another girl having fun.

“Actually,” I say, turning to Deanna, “thanks.”

“You’re thanking me?” she asks.

“Hey, I know I’m in big trouble but tonight was an adventure—-probably the last one I’ll have until I’m thirty.”

“Don’t mention it,” she says. Most people would say she has no expression on her face, but I can tell she’s smiling