Mythmaker: The Life of J.R.R. Tolkien, Creator of The Hobbit and The Lord of the Rings by Anne E. Neimark 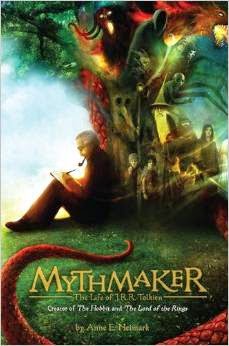 With the success of the Lord of the Rings trilogy in theaters, many non-readers came to know Frodo Baggins as the hobbit with the eccentric uncle Bilbo Baggins. Wanting to know Bilbo's backstory, either through the new Hobbit trilogy or J.R.R. Tolkien's novel, those same non-readers suddenly became readers. For fans of the novel from the beginning, The Hobbit holds a special place in the hearts of many new, young readers as well as those who grew up with the novel and are now enjoying it on film (well, maybe, but that's a review for my husband Brett Gallman).

In order to fully understand the power of Tolkien's novels, one must understand the man himself. Anne E. Neimark steps forward with an accessible biography of the man who brought hobbits, shires, elves, and orcs to life.
Born John Ronald Reuel Tolkien in England, Tolkien spent most of his childhood in South Africa where he was watched closely by his nurse while his parents were away. Growing up in one of the most exotic lands in the world, any little boy's imagination would run wild, and Tolkien's created all sorts of creatures and languages. Once bitten by a tarantula and still wanting to climb a tree, his passion for accomplishing great feats was never ending.

Living both an exciting life in South Africa and England and a sorrowful life with the death of his parents at a young age, Tolkien turned to two things to bring him happiness: academics (specifically the study of the philology) and a young woman who became his entire world.

The newest paperback edition is ideal for young readers. Complete with an introduction, eleven short but efficient chapters, and a chronology of Tolkien's writings, Neimark's biography presents the life of a man who not only is the face of classic young adult literature but who has inadvertently changed film making.

One aspect of Tolkien's reach remains the same, however. His imagination and creativity is the product such a fascinating life, riddled with both mythology and realism.
at December 15, 2014