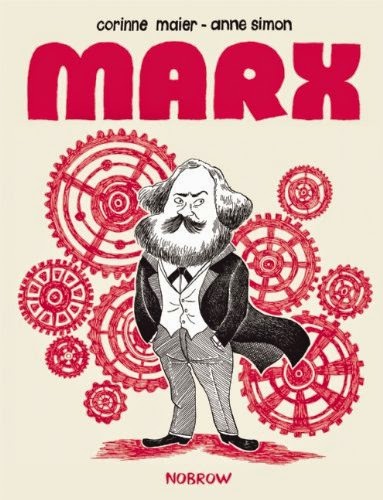 For many, Karl Marx is the author of The Communist Manifesto and the "devil for decrying Capitalism." His support of a world "free from exploitation, inequality, unemployment" was championed by minorities and those searching for equal rights and justice; however, many disagreed with his revolutionary solutions.
This is Maier and Simon's second book, the first being the biography on Sigmund Freud. The illustrated book begins with Marx's birth in 1818 in Trier. Even then, Marx was ahead of his time. Young and incredibly smart, Marx was quick to fight against a capitalist system that seemed to submerge the middle and lower classes in a pool of materialism.

Maier and Simon take the reader through Marx's entire biography, covering everything from his religious beliefs, or lack thereof, to his clever and judicious newspaper writing to the leaders of Eastern Europe, China, and Russia who took Marx's ideals and twisted them into what many view Communism as today.

While Marx's struggle to raise the lower class may have been ideal, his life surely wasn't. An affair with his maid marred his plight for the underprivileged. Maier and Simon present Marx's full biography, without exception, which presents a clear picture of Marx, the man, not necessarily the revolutionary.

Whether working on a paper or just out of curiosity, this is an accessible look into the life of Karl Marx for teens and young adults

Email ThisBlogThis!Share to TwitterShare to FacebookShare to Pinterest
Labels: Biography