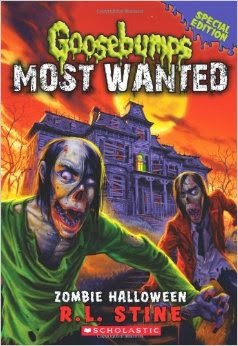 Any person who considers himself/herself a reader began with Goosebumps. For me, it was Goosebumps around ages nine and ten, and I then I moved up to the Fear Street series around thirteen. R.L. Stine was my reading life. Now that I'm almost thirty-one (yikes), I still see kids (and adults) buying the Goosebumps series. My little cousin loves them, and my high school students swear by the series in their literacy narratives. There's no denying the staying power of an author across so many generations, and R.L. Stine is the prince of horror (sorry, but I have crown Stephen King as, well, king).
Mario, Anthony, and Ivy are your typical kids, wanting to stay outside and explore. It just so happens that they live across from a graveyard. It's 1944, and there's nothing more exciting than investigating a graveyard, except this one comes with whispers and phantom shoves. After being trapped in an open graveyard, Mario, Anthony, and Ivy leave confused, wondering who shoved Mario into the grave in the first place, and who is whispering as they run away. Returning home, they soon discover a trap door, and like any adventurous kid, they explore it, only to be chased out by zombies!

Fast forward, and we meet Kenny who lives with his grandfather in the same house as Mario. Kenny, like Mario, notices strange things next door, especially when the neighbors have a set of coffins brought in. Kenny's Grandpa Mo is terrified of zombies, though Kenny doesn't fully understand why. Who are Kenny's neighbors, and what happened to the zombies from 1944?

Filled with classic Stine horror and perfectly designed cliffhangers, Zombie Halloween won't disappoint, and it's perfect for Halloween, which is just around the corner. Happy reading!