Blog Tour: The Islands at the End of the World by Austin Aslan—The next big thing in YA 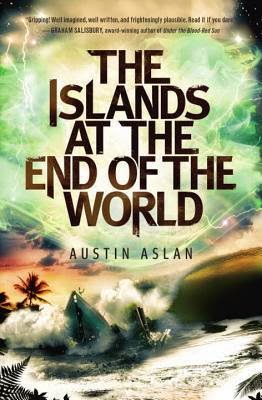 In the last four years, we have seen two ferocious females take center stage in YA dystopian literature. Katniss Everdeen of The Hunger Games displayed both vulnerability and skill, and Tris Prior of Divergent illustrated compassion and change. Both girls, however, came to us pretty well put together, at least by Hollywood’s standards. Now, Austin Aslan brings us Leilani, a half Hawaiian, half white, sixteen year old girl with epilepsy who must travel from Hilo, Hawaii to Honolulu with her father, Mike, for a possible new treatment. Upon arrival, the world is shaken and thrown into chaos, and Leilani and her father must find their way home.

Leilani is a heroine that many girls can aspire to emulate. After the world loses its technological capabilities, Leilani and her father realize that getting home will be much harder than anticipated. There are no commercial flights, and the few private flights cost too much and are too dangerous. At first worried about her epileptic fits, Leilani must learn to control herself both mentally and physically in order to make it home to her mother, brother, and grandfather…and to decode the messages that she is receiving while she is unconscious.

Aslan’s island adventure not only provides enough drama in following Leilani’s journey home and watching her learn how to listen to her heritage, but it also shows off Aslan’s own time spent in Hawaii. This setting is as authentic as they come, and I enjoyed learning new terminology and the values of another culture. We don’t often stop to consider Hawaii’s geography, and the book is successful at not feeling like a college lecture in cities and maps. It’s easy to think about getting from point A to point B when there are no tsunamis involved and the world hasn’t been stopped in its tracks.

Leilani is the new face of dystopian literature, showing that not every teen girl needs to be the perfect girl-next-door type to change the world.
at August 18, 2014